Michigan summer berries are off to a fast start: Harvest is early and quality is great!

Michigan summer berry season is three weeks early this year. Early spring berry harvest is underway and that means the season will end early as well.

If you plan on getting your Michigan strawberries in late June and early July, you will miss the harvest. The March heat wave started Michigan’s fruit crops early. Michigan summer berries escaped most of the damage from the April freezes that hammered tree fruit. Because of the early start, berry season is about three weeks earlier than normal. Strawberry harvest in southwest Michigan started about two weeks ago in late May. Strawberries in southern Michigan are normally harvested in late June and the summer heat causes the fruit to ripen rapidly, so later pickings have much smaller fruit. Because our season is earlier we are having cooler weather, which has slowed down growth and ripening, so strawberry fruit size and quality in 2012 are excellent. 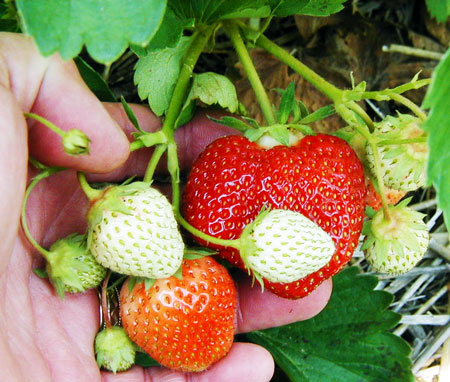 Strawberry fruit cluster showing the progression of ripening.
The first picking fruit are the largest and later pickings are smaller.

The bad thing about an early start to berry season is that we can also expect an early end. Since harvest is beginning two to three weeks early, you can expect an earlier than normal end to the season. This means if you plan your U-pick excursions by the calendar, there is a good chance you will miss the season. You don’t want to arrive at the farm ready to pick delicious Michigan berries, only to be told that the harvest ended last week. 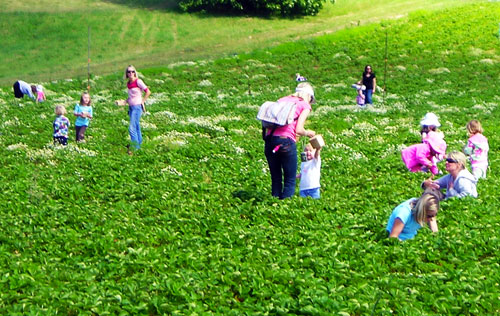 U-picking strawberries with the family is one of the joys of summer.

Another impact of the early start to spring across the state is that the season is compressed. Normally, berry harvest begins in the south and slowly moves northward with the harvest starting a week later for every 30 or 40 miles you travel north. Not in 2012 – it is possible that strawberries will be harvested across the Lower Peninsula next week. Last week they were picking strawberries in southern Michigan. Now they are picking strawberries northwest of Grand Rapids, Mich., and by the weekend you may see local strawberries in Traverse City, Mich.

You can expect this pattern to hold true for the rest of the berry season. Blueberry harvest is expected to begin in southern Michigan in late June, about two weeks earlier than average. You can expect summer and fall raspberries to be early as well.

Making It In Michigan Conference and Marketplace goes virtual for 2021

Rethinking access to food: Lessons learned during a pandemic