The 2013 season presented a number of challenges to Michigan growers, but overall crop quality is high.

Under the first snowfall of the season, edible chestnut harvest is wrapping up in orchards in northern Michigan and has concluded for many growers further south. The 2013 season was certainly less eventful than 2012 in terms of temperature and rainfall, but still presented a number of challenges to growers. Rainfall during the spring pollination period interfered with fertilization. Remember, chestnuts are primarily wind-pollinated and rain physically washes pollen from the air and off of male flowers, preventing the majority of pollen from reaching receptive female flowers.

Growers reported early on that burs were forming, but had limited or no kernels inside, particularly in orchards with limited pollinizer varieties. Orchards with multiple pollinizer varieties seemed to fare better with higher fertilization rates and nut production. This higher production was likely due to increased pollen availability during the three weeks or so that chestnut flowers were receptive. Although exact flower receptivity windows vary based on variety and weather conditions, research by Michigan State University’s Dennis Fulbright has shown that Colossal, in particular, can maintain receptive flowers for up to three weeks in Michigan. This three week fertilization window is potentially longer than any one pollinizer variety could sustain pollen shed, particularly under wet conditions and slightly different maturation dates. 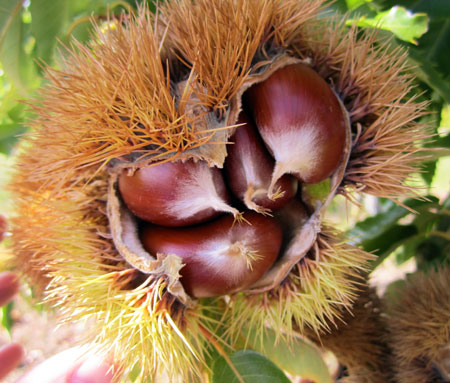 Maintaining a variety of pollinizers with overlapping pollen shed timings surrounding the projected female flower bloom time provides for a higher probability that pollen will be present when weather conditions and flower maturity are right for fertilization to occur. In 2009, Michigan growers experienced a cold and wet summer during bloom causing a lack of pollination and drop in production similar to what is being reported and observed this season.

Chinese chestnut trees appeared less affected by poor pollination weather this season, likely due to a different pollen shed and bloom period during better weather conditions; however, Chinese chestnuts are still on some trees in some locations as they generally mature later, so the final verdict on productivity will have to wait. Overall, CGI is projected to at least double their production from last year, but will still be approximately 25 percent lower than their all-time production high, which occurred in 2011.

Interested in learning more about chestnuts? Be sure to check out Michigan State University Extension’s chestnut session and booth at the Great Lakes Fruit, Vegetable, and Farm Market Expo in Grand Rapids, Mich., Dec. 10-12, 2013.