Growers are still finding scale crawlers hatching. This scale feeds on sap on the woody shoots of pine trees. It is known as black scale because it secretes a huge amount of sticky, sugary honeydew. Black sooty mold then grows on the honeydew, turning affected shoots and foliage black.

We have found that crawlers can continue to hatch over a month. You should be scouting your trees now, looking for crawlers. The crawlers are bright pink or red and you will be able to see them moving about on the twigs and needles. In areas where you have a heavy population, you may need to apply a second spray. Remember good spray coverage is essential.

In most years, the summer generation eggs continue to hatch over a relatively long time of two to four weeks. This extended period of hatching probably occurs because the spring generation scales develop at different rates during May and June. Some scales develop relatively quickly because they are exposed to more sun and warmer temperatures than scales that feed in shaded locations on the tree. The newly hatched crawlers move onto the expanding shoots and feed primarily on the current-year needles. These scales mature and lay eggs late in the summer, then die. Their eggs over-winter under the white armor until the following spring.

Research at MSU indicates that the summer generation eggs can begin hatching at roughly 1,250 GDD 50 (usually early to mid-July). Hatching may continue over two to three weeks. The ideal window for applying insecticides to control the summer generation eggs generally occurs at around 1,500 GDD 50. This is when nearly all eggs have hatched and most crawlers are in the hyaline stage. Applying an insecticide after scales have produced the hard, white armor will not be effective because scales and even scale eggs are well protected by the white armor.

Douglas fir growers should be actively scouting the trees near harvest age for Cooley spruce gall adelgid. Check for white, cottony balls dotting the undersides of needles on Douglas-fir. If you look under the cottony material, you will find pale peach-colored eggs or possibly the first emerging nymphs. Eggs will hatch about 1,500 – 1,600 degree days base 50. In most years, this has been the last part of July to the first part of August. Insecticide can be applied once these eggs hatch to control nymphs that will over-winter.

We see several needle rusts on conifers. These can be defined by their conifer hosts; balsam fir needle rust, pine needle rust and spruce needle rust. Spruce needle rust is showing up now in Christmas tree fields and blue spruce in the landscape. Needles have yellow bands with small yellow-orange pustules on them. Spruce needle rust overwinters on Labrador tea and leather leaf and spores from those alternate hosts are now infecting spruce trees. In July and August, yellow current-year needles with whitish-orange blisters filled with yellow spores on Colorado blue, black and white spruce will appear. This will be followed by shedding of infected needles. These alternate hosts are members of the Heath family and are found in bogs and damp thickets.

In scouting, we have started to find some spruce spider mite on Fraser fir and spruce. Growers should still be scouting for these mites. Pay particular attention to the trees you plan to harvest this year. Check for mite activity by closely inspecting the older needles near the tree stem or by sharply rapping shoots over white cardboard or a notebook with white paper. 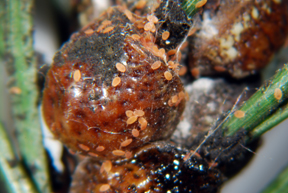 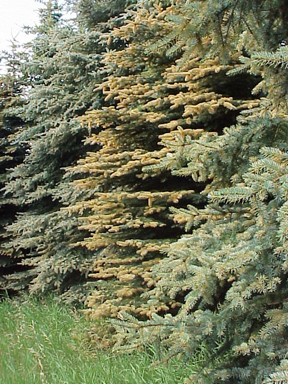 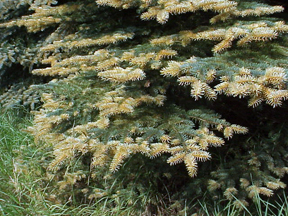 Pine and rose chafers are active in Christmas tree fields