An innovative partnership with a Flint area hospital system and Michigan Food and Farming Systems to support women who are beginning a farming business by providing a place where they can receive education and development to achieve viable farming careers.

In Michigan over the last 30 years, the number of farm acres where women are the primary operators has more than doubled, fueled in part by new opportunities in small scale farming and associations with the local food and sustainable agriculture movements. This trend is noted in the United States Department of Agriculture’s Census of Agriculture in 2012. The increase in women farmers has corresponded with the growth of a variety of programs aimed at supporting women’s role in agriculture, which has expanded in regions across the United States. Women are considered the fastest growing farming population in the United States, although they tend to operate smaller farms than men, which corresponds with small scale diversified farms producing for direct sales.

In 2014, in response to a request from a group of small scale urban and peri-urban women farmers in Flint looking to scale up their farming efforts, Michigan Food and Farming Systems (MIFFS), with its mission dedicated to supporting beginning and historically underserved farmers in Michigan, responded by supporting a pilot Women in Agriculture network (WIA) in Genesee County and the extended area. In cooperation with a small grant from the Michigan State University Center for Regional Food Systems (MSU-CRFS), MIFFS explored how to engage female farmers in the Greater Flint region, reaching out to the local Michigan State University Extension Community Food Systems team for support and access to their food and farming network, as well as engaging directly with diverse female food producers to build a trusting team to guide the work. To learn more about the pilot program, please read the report, Discovering Ourselves: A Pilot Network of Women-in-Agriculture Genesee County and Extended Area which describes the planning process, developments and lessons learned that created the WIA network of Genesee County and extended area. As the next step in the group’s evolution, the women farmers expressed their interest in a training space to further build their skills. MIFFS sought additional funding to continue the WIA network and to develop an incubator farm site in the greater Flint area, to support beginning and experienced women farmers. Financial support initially came from the Community Foundation of Greater Flint (CFGF), then through a partnership with MSU-CRFS on a USDA Beginning Farmer grant, which was awarded in early 2015.

Through several WIA network meetings in 2015 hosted by MSU Extension and sustained by the collaborative learning environment and collective decisionmaking process the network had nurtured, women planned the farm’s space, its features, and initial educational opportunities. Prior to the farm’s ground breaking and shortly after, several educational day long workshops for WIA network participants (with support from Michigan State University’s Student Organic Farm) were held on area farms. The physical location of the WIA Farm Development Center was determined by an innovative partnership with Genesee County-based Genesys Health System. Genesys partnered with MIFFS to establish the farm site at their Genesys Health Park Campus which is just south of Flint. The WIA Farm Development Center fits the Genesys strategic objective where keeping people healthy is just as important as treating them when they are sick, and healthy food access helps to accomplish that goal. The WIA Farm Development Center occupies three acres and is intended to serve as a communi­ty-based, resource-sharing and educational center for producers and consumers in the region. It is not exclusively intended to support women only - men are welcome, yet the project is intentionally lead by women.

In late August, ground breaking at the women’s farm center’s site took place, and a cover crop was planted that day to build the soil and hold it in place. On the first two weekends in November, a season-extending hoop-house was constructed. Two dozen WIA network members and their supporters made up the construction crew, led by experienced women hoop-house growers from the Flint area who incorporated a hands-on educational training in hoop-house construction as part of the process. 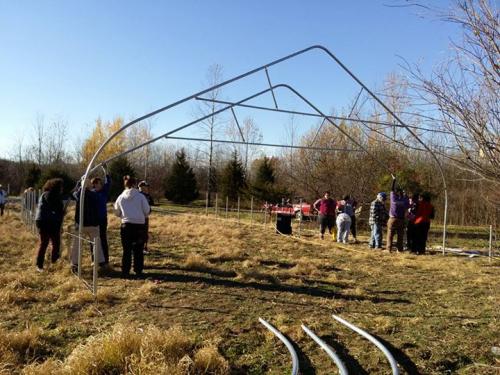 The purpose of the WIA Farm Development Center is to support women who are beginning a farming business by providing resources to become economically independent farm business owners, and to reduce significant barriers to starting a successful farm business. This effort is based upon work that is supported by the National Institute of Food and Agriculture, U.S. Department of Agriculture, under award number 2015-70017-22856.