A vermicomposting project on a Flint area women’s development farm has been established to help improve soil and plant health, and build community self-reliance.

Michigan Food and Farming Systems (MIFFS) is a statewide non-profit organization that connects beginning and historically underserved farmers to each other and resource opportunities; ensuring social justice, environmental stewardship and profitability. In late August of 2015, Genesys Health System and MIFFS partnered to establish a new Women in Agriculture (WIA) farm site within Genesee County on the Genesys Health Park Campus. The purpose of this WIA Farm Development Center is to support women who are beginning a farming business by providing resources to become economically independent farm business owners and to reduce significant barriers to starting a successful farm business.

The three acre site of the WIA farm was developed in 2015 with the planting of cover crops, and in November of 2015, a hoop house was constructed by many volunteers from the Women in Agriculture Network (WIA) and their supporters, including two Michigan State University Extension food systems educators. In late June of 2016, the MIFFS and WIA networks hosted a large scale vermicomposting workshop and a vermicomposting system build at the Genesys WIA Farm Development Center. The workshop was an opportunity for small scale farmers to learn about vermicomposting (composting with worms), how to do it and the benefit and value it can add to a farm. Starr Valley Farm Manager, Jesse Raudenbach and MIFFS WIA Network co-creator and compost expert, Amy Freeman came out to teach farmers and gardeners about the processes and procedures of large scale vermicomposting.

At the workshop, attendees learned about the Genesys WIA Farm Development Center and the future goals that MIFFS has for it. Two of the goals for the WIA farm consist of integrating more of the foods grown at the farm into the kitchen at Genesys Hospital, as well as increasing the amount of produce sold at the Genesys Farmers Market. Educational workshops are also part of the overall plan for the Center, and this hands-on workshop covered the differences and similarities between traditional composting and vermicomposting.

As the workshop progressed into the actual guided construction and build phase, those in attendance started digging a hole where vermicomposting would take place. Based on the current size and future plans for the Genesys WIA Farm Development Center, the vermicomposting area was dug to be twelve feet long, by three feet wide, by four feet deep, and will be able to process from 200 to 700 pounds of organic matter per week. In order to construct the hole so that it did not collapse on itself, Jesse Raudenbach made sure that it angled inward in a V shape to ensure that the sides of the pit remained intact. Although several days of hand digging, workshop attendees were invited back to help install the wire netting (mesh) that lines the pit with openings small enough to prevent pests such as moles, but large enough to allow the worms to escape if the environment ever became undesirable for them in the compost. The system should take 96 pounds of worms when fully functional, which equates to approximately 96,000 worms. 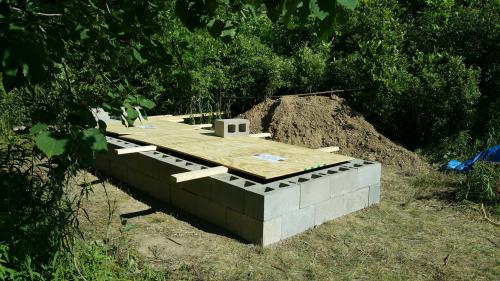 Vermicomposting is a great way to improve the flavor, yield, and overall health of plants and vegetables. The finished product from the vermicomposting process is called vermicast (worm castings). Vermicast is a very desirable soil amendment that increases the biodiversity and fertility of the soil. Healthy soils grow nutritious food and healthy plants. The added value of the finished compost or vermicast is that it also provides needed organic matter to the soil. This vermicomposting system is part of a plan for the WIA Farm Development Center to provide education for composting and its important role on the farm. It was designed to be beneficial to the crops grown on the farm, but also to become an investment piece for the farm. After so many seasons, the worms will be able to produce enough composted material to exceed the amount needed for the Genesys WIA Farm, and eventually they will be able to sell this added value, nutrient rich vermicast for profit as an enterprise business.

The future plan at the WIA Farm is to include additional composting techniques and processes. The team is currently working with the Institute for Local Self Reliance on a collaboration supporting compost education. This collaboration would bring the Neighborhood Soil Rebuilders Course to the WIA Farm and to the Flint community in 2017.

Sign up now for the 2022 MSU Organic Farmer Training Program