Warmer than normal winter may set up possibility for increased late-winter damage to landscape trees and shrubs.

While people living in northern Michigan received a reminder this weekend of what winter in Michigan is all about, residents of the southern Lower Peninsula continue to enjoy a mild and warmer than average winter. Based on MSU’s Enviro-weather’s records, daily average temperatures in the East Lansing, Mich., area are tracking 5.2°F warmer this winter than during the previous 15 years. The departure from the 15-year mean is even larger (more than 5.6°F) when we look at daily minimum temperatures (see Figure 1). Minimum temperatures are especially important when discussing winter injury to landscape plants since extreme low temperatures and conditions immediately preceding them are often responsible for bud-kill and other winter-related plant injuries.

With a generally mild winter and only a few brief temperature dips below average, one might expect that we will see few winter-related plant problems this spring. However, prolonged exposure to temperatures above average means that plants are beginning to de-harden early. We see several signs of this already, such as witch-hazels blooming in protected locations (Photo 1) and sap in maple trees running two to three weeks ahead of normal. 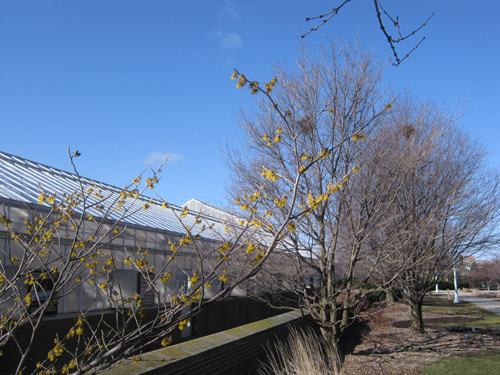 While other trees and shrubs may not show the same outward signs, they are progressively becoming less cold-hardy by the day. Despite the relatively mild winter to date, there is still a risk for a rapid drop in temperatures. In mid-Michigan, temperatures in the single digits are possible throughout the month of March. Given the preceding mild conditions, a sudden, severe cold snap still holds the potential to cause considerable damage to developing buds on trees and shrubs. This type of late winter damage may be evidenced by shoot die-back, bud-kill or death of newly-emerging shoots. As always with winter injury, the final result won’t be known until late May or early June.