Weather and soil conditions are affecting the color of Michigan maples during fall 2013.

I have received several calls and e-mails in the past week or so regarding the color and condition of maple trees around Lower Michigan. The inquiries fall into two categories: those concerned with maples and other trees showing early, red fall color (Photos 1-2), and those concerned with maples showing extreme yellowing, or chlorosis (Photo 3). In both cases, the abnormal leaf color is related to environmental conditions. 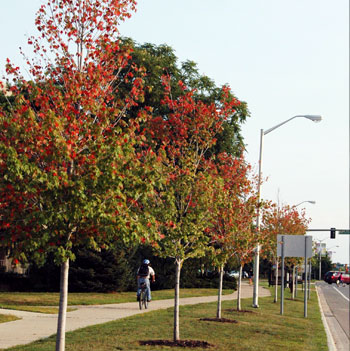 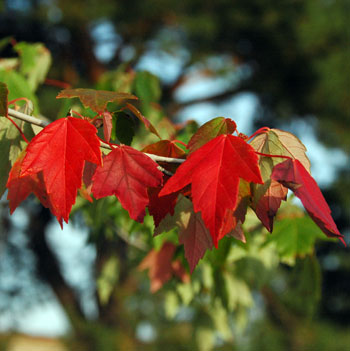 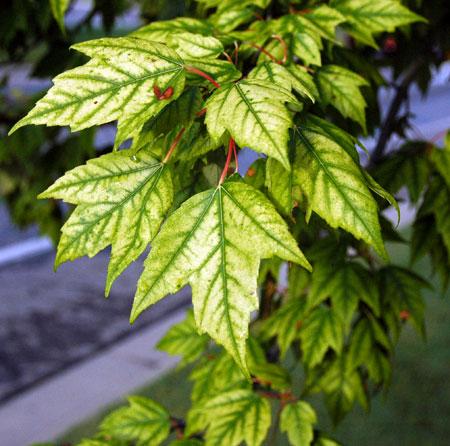 Let’s consider early fall color first. Last year (2012), early fall color in maples was fairly widespread due to the extreme heat and dry weather that most of the state experienced. In contrast, summer 2013 has been much milder and generally wetter than 2012. However, late summer rainfall has been comparable or even lower between this year and last year for many locations. In East Lansing, Mich., for example, we have had 2 inches of rain from mid-July to mid-August (week of July 14 to week of Aug. 11), while we had over 4 inches of rain during the same period last year. In addition, it is likely that the lingering effects of last years’ heat may be contributing to continued tree stress and early color this summer.

While early, red fall color is associated with moisture stress, abnormal yellow color in maple trees is frequently associated with nutrient deficiencies, particularly manganese. Manganese deficiency is relatively common in red maples and is usually associated with soil pH. As soil pH increases, the ability of red maple trees to take up manganese decreases. The deficiency may be induced by relatively small changes in soil pH and it is not uncommon to see yellow chlorotic trees only a few yards away from dark-green, healthy trees. In some cases, it is possible to correct the underlying soil pH problem by applying elemental sulfur or acidifying fertilizers. Soil pH testing and corrective recommendations are included as part of the Michigan State University Extension Soil Test Kit Self Mailer program.