Moles in the lawn

What works and doesn’t to deter moles from tunneling in turf.

Now that the snow is gone and the turf is greening up, it has become painfully obvious to many homeowners and turf managers that moles were once again very active in tunneling and creating mounds throughout the late winter and early spring.  Anyone that has any experience maintaining turf – whether it’s a home lawn, golf course, school grounds, or commercial property in Michigan – has at one time or another battled moles. 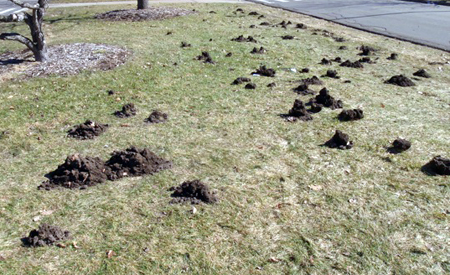 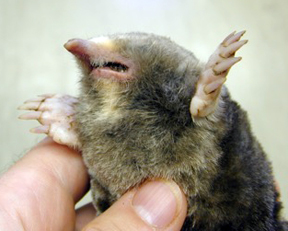 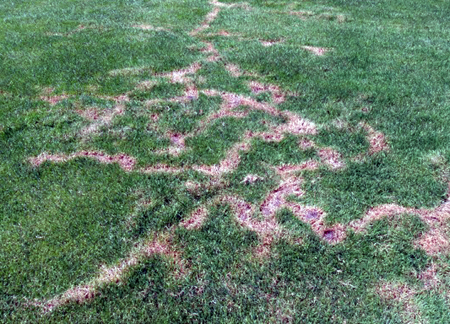 First of all, let’s eliminate the one suburban legend that often comes forward when thinking of moles. Moles do not equal grubs and grubs do not equal moles. Just because you have moles doesn’t mean you have grubs and eliminating grubs will not eliminate moles! Moles are insectivores; they eat insects, worms, and other invertebrates. Notice they eat other delicacies besides just insects; grubs are just a portion of their diet. Now if you have grubs and they are slowly decimating your turf, you probably want to control them, but don’t go applying insecticides simply thinking you’ll get rid of the moles.

There are several products that are available to “discourage” moles. Castor oil based products are widely available and some success stories have emerged from these products, but results can be inconsistent (get used to that saying).

Mothballs or mothflakes placed in the tunnel – not effective or inconsistent.

Planting a barrier of plants that are toxic such as castor beans, marigold, or Fritillaria – no research to support claims.

Vibration devices omit some vibration into the ground to discourage moles – ineffective, however can be very decorative.

Direct trapping can be very effective, but requires some stealth in identifying active tunnels and setting the traps properly – definitely the option for those with revenge on their mind. Please realize that by trapping, we don’t mean a catch and release program.

Poison baits such as Tomcat Mole Killer (Talpirid) – actual research on moles tends to support this poison bait as being effective. Talpirid looks just like an earthworm, one of the moles favorite dishes, unfortunately it’s now also available in a grub looking form reinforcing that suburban legend of grubs equals moles. Professionals and homeowners alike continue to report good results. Always be cautious when using poison baits. I have three dogs and three cats roaming my lawn and from time to time they enjoy digging in the lawn so poison baits aren’t a realistic option for me.

Smoke cartridges – reminds me of the gopher in Caddy Shack – not effective.

Poison peanuts – from what I’ve read, peanuts are not a normal part of a mole’s diet and therefore, this is probably not effective.

Home remedies such as chewing gum, razor blades, glass, hair etc., are not effective and can be dangerous to you or pets. (Imagine that, razor blades or glass in the lawn being dangerous.)

From time to time, I write articles about moles in the lawn and commonly receive comments that the various home remedies do work and I either have bad information or whoever gave me that information must be doing it wrong. To all of you I have said and will continue to say, if the juicy fruit works for you, fantastic and keep it up. For the rest of us, keep trapping, baiting, or consider joining your local chapter of Moles Anonymous.