Traps for blueberry maggot fly should already be deployed in southwest Michigan to ensure accurate detection of the early flight of this pest. The first catches were in late June in the far southwestern region of the state, and some unmanaged fields are already showing mature larvae of this pest. Detections of flies in managed fields have been very low, but after the rainstorms that have passed through recently, there has been a spike in catches of blueberry maggot flies. This pest overwinters in the soil, and needs soil moisture to emerge from the ground. With the hot, dry conditions of 2016, most of the emergence seems to have been be delayed, but the rains have changed that for much of the state.

After emergence, female flies require approximately seven to 10 days to become sexually mature and mate, at which point they will begin laying eggs. Eggs are oviposited under the skin of ripening blueberries, with a single egg deposited per fruit. Eggs hatch in about five days and the maggots begin feeding, completing their development within a single berry. Upon maturity, the maggots drop to the ground, burrowing up to several inches into the soil before pupating. In Michigan’s climate, these pupae will not emerge until at least the following growing season.

Although it is late to be starting monitoring now, it can still tell you about distribution of this pest across your farm. Initial adult emergence is best monitored using yellow sticky boards baited with ammonium acetate (or ammonium carbonate) as a food attractant, because newly emerged females are actively feeding during this pre-oviposition period. These traps should be placed on a stake or hung on an upper branch of a blueberry bush in a perimeter row (south facing side of bushes) with enough foliage cleared from around the trap so leaves don’t stick to it. Hang traps with the colored side down in a V-orientation (see photo). Traps should be deployed before first anticipated flight (late June), since most flies are expected to be immigrating from wild or non-sprayed hosts outside the commercial planting. If a resident fly population is suspected from previous infestation, a trap placed inside the field is a good idea to detect internal infestations. Traps optimally should be checked twice weekly starting just before first fruit coloring until the first fly is caught, triggering fruit protection activities. 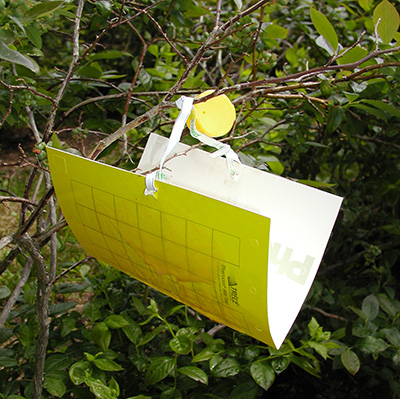 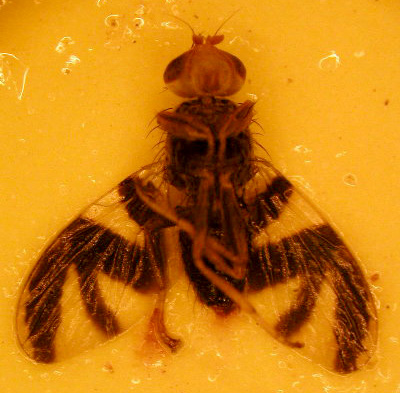 After the pre-oviposition period is complete, female flies will begin actively searching for fruit to lay eggs in, and there is a trap available that mimics the visual stimulus of a fruit. A green sphere trap baited with synthetic fruit volatile lure can also be used to monitor fly activity in fields. Again, these traps should be placed in perimeter rows of the field unless there is evidence of a resident population far in the interior. However, if the yellow sticky cards have been used effectively, these should be sufficient to monitor the flies.

Blueberry maggot control has been achieved for many years using broad spectrum insecticides. These kill the adult fly on contact and prevent the insect surviving to the point of being able to lay eggs into the fruit. The organophosphates Malathion and Imidan are highly active on blueberry maggot, with the latter two products having shorter pre-harvest intervals and potential for use closer to harvest. Carbamates such as Sevin and Lannate and the pyrethroids Asana, Mustang Max, Bifenture and Danitol are also active on adult fruit flies. This chemical class is sensitive to degradation from light and heat and highly toxic to natural enemy insects, so this is something to consider depending on the weather conditions in June and July.

The following reduced-risk insecticides are effective at controlling blueberry maggots and also spotted wing Drosophila (SWD). The spinosyn-containing compounds Delegate and SpinTor (non-organic) and Entrust (organic) are highly active on blueberry maggot adults when ingested, and will also control SWD. Of these options, Delegate will provide the best fruit protection from these fly pests. In field trials with high pest pressure and two week application intervals, the performance of the spinosyn insecticides has been rated as good-excellent against blueberry maggot (see table). Performance would be expected to be higher in fields with lower pressure and with less time between applications. Exirel is a new insecticide from the diamide chemical class that has demonstrated excellent control of blueberry maggot in our Michigan State University trials and is also very effective against SWD.

Rimon is registered for use in blueberries at 20 to 30 ounces per acre, and this insect growth regulator can provide an important component of a rotational program against blueberry maggots to minimize the chance of insecticide resistance. Because this insecticide is not toxic to adult flies, but acts to disrupt egg and larval development, it should be applied at the start of fly activity as determined by monitoring traps. Rimon is recommended against blueberry maggots, but provides limited control of SWD.

While the neonicotinoid insecticides such as Admire and Actara are active on blueberry maggots, Japanese beetles and aphids, they are not effective on SWD.

Drs. Isaacs and Wise’s work is funded in part by MSU’s AgBioResearch.

Fruitworm control in blueberries for 2020

Some simple tips for reducing pesticide risk to pollinators