Moth fly larvae cause a stir in bathroom toilet

About a month ago, I had a telephone conversation with a client that began as follows.

“Hello, you may not be the person I need to talk to.”  The client stated.

“Well, if you have some kind of bug problem, you’ve reached the right person.”  I replied.

“I don’t have a bug problem, but I think one of my friends may have one.”

The client went on to say that she and her family had just returned from a week long vacation and that some friends had stayed in her house while they were gone. Shortly thereafter she discovered twenty or so small worms at the bottom of one her toilet bowls. Her first thought was that these worms had issued from one her house sitting friends and she was concerned to say the least. She said she had taken a photograph of the worms and asked if I might be able to identify the worms from the photograph. I told her that I would try and gave her my email address. Within a few minutes, I received her email with the photograph attached. Her excellent photo showed 22 moth fly larvae and one moth fly pupa lying at the bottom of a toilet bowl. The client was quite relieved to learn that none of her house sitting friends was infested with parasitic worms.

Parasitism describes a relationship between two different organisms in which one organism benefits from the relationship while the other is harmed by the relationship. As far as people are concerned, commensal relationships with worms and insects are much preferred to those that are parasitic.

Moth fly larvae are hard to come by and these looked like great specimens, so I told the client that I would very much like to have as many of the larvae as she was willing to collect and preserve. I asked her if she wouldn’t mind gently removing them from the toilet and then place them directly into a pan of near-boiling water for two minutes, then remove and drain them (much like pasta) and place them directly into a leak proof vial filled with rubbing alcohol. Sadly, she wrote back saying she had flushed those shown in the photograph, but she would save for me any others that might show up in the future. Two weeks later, I received a small vial from her containing a dozen or so perfectly preserved moth fly larvae.

Because of where moth fly larvae make their living in homes and other modern structures, moth flies are also known as drain flies. In nature, moth fly larvae, Psychoda sp. (Diptera: Psychodidae) normally occur in aquatic habitats that experience intermittent submersion or flooding. The larvae develop in polluted, shallow water or highly moist organic solids where they feed on decaying organic material in mud, moss or water.

In homes, the adult flies, which resemble tiny moths, are most likely found on the walls of bathrooms, kitchens, basements and other locations where sewer drains and plumbing fixtures are located. The flies are poor fliers and usually are found close to the drain or area from which they came. Moth fly larvae are known to live in drain traps, garbage disposals, toilet tanks, sides of drain pipes and overflow pipes in homes, wet areas around leaky pipes, sewer lines, and septic tanks where they feed on stuff that might accumulate in such areas. The moth flies that live in Michigan do not bite and are not known to transmit disease of any sort.

The best way to control moth flies is to eliminate or reduce the larval food sources by thoroughly cleaning drain lines and plumbing fixtures. Pouring boiling water down the drain where larvae are suspected to be may help to reduce their numbers. Adults can be controlled with the application of a household aerosol insecticide (like Raid) or a good flyswatter. Be sure to read and follow all instructions and safety precautions found on the label before.

Ascaris roundworms are nematodes that live in the small intestine of people. An infection with Ascaris worms is called ascariasis. Adult female worms can grow over 12 inches in length, adult males are smaller. According to the Center for Disease Control (CDC), ascariasis is the most common human worm infection. Infection occurs worldwide and is most common in tropical and subtropical areas where sanitation and hygiene are poor. The CDC estimates that 1.5 billion people were infected with Ascaris in 2002. Children are infected more often than adults. In the United States, Ascaris infections are rare, occurring mainly in rural areas of the Southeast.

See a nice photograph of an adult moth fly at: http://bugguide.net/node/view/32391 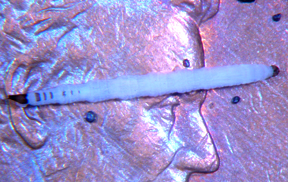 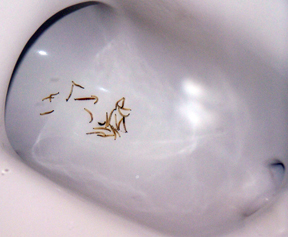 The photo taken by the client of the moth fly
larvae she discovered in her toilet.  Name of
photographer withheld at her request. 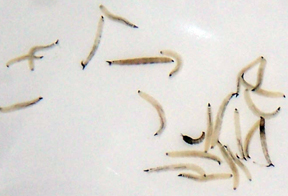 A close up of the moth fly larvae and one pupa she
discovered in her toilet. Name of photographer
withheld at her request.