Distribution: Nova Scotia to Georgia from the Atlantic Coast to the western side of the Appalachian Mountains.

Hosts: Soil dweller, attacks any plant or tree near the nest.

Damage: This ant attempts to kill any vegetation that may grow on the mound or shade the area. The ants do this by biting the plant and depositing formic acid into the wound. This readily kills small plants, but trees may require numerous "stings" over the entire trunk before death results. Attacked plants will be near mounds and the bark will be covered with resin-filled blisters.

Description and life cycle: The Allegheny mound ant, as its name implies, builds above ground nests in undisturbed, open areas. The above ground portion, the mound, acts as a solar collector for incubating ant eggs and larvae. This colonial insect has many queens to lay eggs as opposed to other ants that may have only one. A 19-inch high mound may contain 250,000 individuals. The ants feed on other insects for protein and aphid honeydew for sugar. The ants may be reddish-orange, black or both colors. Colonies are started by a single, mated queen. New colonies take several years to develop enough to make an above ground nest. Larger colonies may also subdivide, like honeybees, resulting in many mounds being located in a given area.

Control hints: Large, numerous mounds are difficult to control. This ant will move to a new spot if severely disturbed and new colonies will become established from surrounding forests.

Option 1: Eliminate food. Since this ant relies on other insects for food, control of aphids, scales and needle feeding insects will reduce mound ant activity.

Option 2: Disturb mounds. Physical destruction of the mounds will usually just irritate the ants, and they will reconstruct the mound. However, continual disturbance, such as plowing two to three times a year, will usually cause a colony to relocate elsewhere.

Option 3: Mound treatments. General chemical sprays to the mounds are usually not effective. Dusts must be applied to the mounds and around the parameter, at least one foot out so that the ants will track through the insecticide. Colonies may burrow underground and establish a new colony

Allegany mound ants, Formica exsectoides, build large conspicuous nests in open fields and in open areas in woodlots and forests. Their large mounds are constructed of soil brought up from excavated galleries below the nest. Large colonies may include over 250,000 workers and over a 1,000 egg laying queens. The mound acts as an incubator for mound ant larvae and pupae. The ants kill nearby vegetation including small trees and shrubs to keep shade off of the mound. They do this by chewing a small hole in the bark and injecting formic acid into the wound. Not surprisingly, they can be a real pest in nurseries and Christmas tree plantations. They will aggressively defend the mound by biting those who dare to disturbed it. This can make life very unpleasant for those who happen to share their yards with Allegany mound ants. Mature mounds may reach over 30 inches in height, six feet across, and the subterranean galleries may go to a depth of six feet beneath the ground.

Mound ants feed on most any type of small insect or arthropod they find as they forage or hunt over the ground. The ants also collect the honeydew secretions from sap-sucking insects such as aphids and leafhoppers. They rarely enter homes or buildings in search of food, which is a very good thing.

There are two approaches to controlling a colony of mound ants: you can chose to drench or dust, or possibly a combination of both. Keep in mind that because of the colony’s large size and determination of its occupants, mound ants are very difficult to control. Dusting the top of the mound and around the perimeter with an insecticidal dust like Sevin Garden Dust can be effective if repeated enough times. The dust is picked up by the ants and spread throughout the colony. The dust will cake up and become ineffective if rained on, so dusting requires multiple treatments over several weeks to have any effect on the mound.

Drenching a mound with a liquid insecticide, like liquid Sevin, requires the top of the mound be scraped away with a shovel to expose the large tunnels below it. To confine and concentrate the insecticide on the mound, it’s best to shovel out a depression or bowl centered on the mound. This will cause the insecticide to drain into the mound and not run off. It is safe to assume that the ants will not ignore this intrusion, so be prepared by having on long pants, which should be tucked into socks or boot tops. A brush will be useful to remove ants that crawl on to you during the operation. After opening a mound, pour in about one gallon of the diluted material per foot of mound diameter so that it soaks or drenches into the soil. Repeat the process at two week intervals until no further activity is observed. 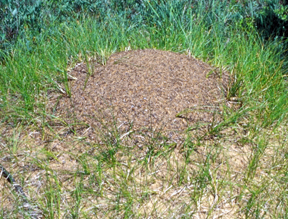 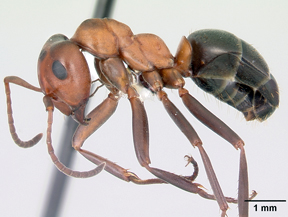 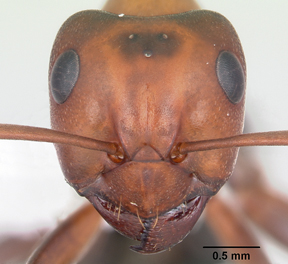 The business end of a mound ant. They
don’t sting, but their sharp mandibles
shown here can deliver a painful bite.
Photo credit: A. Nobile, antweb.org