Each winter the team of MSU Extension dairy nutritionists hosts a series of Nutrition Roundtable meetings for dairy nutritionists practicing in Michigan and northern Indiana. In December 2010 and January 2011, five meetings were held across the state. We discussed a variety of current topics, new products, and new nutrition research. This article highlights three areas that were especially ‘hot topics’ at the last series of meetings.

Optimal body condition score (BCS) at calving was discussed extensively in the Roundtables. This topic also was addressed by Dr. Phil Garnsworthy (University of Nottingham, UK) at the American Dairy Science Association Discover Conference on Transition Cow Biology and Management in September 2010. He said that a BCS loss of 0.5 unit (1 to 5 scale) is acceptable for fresh cows and that cows should calve with “BCS between 2.5 and 3.0 to optimize health, fertility and lifetime performance.”

This is lower than the commonly recommended range of 3.0 to 3.5. We know that cows that are excessively fat at calving are more prone to develop health disorders and have an extended period of negative energy balance, reducing reproductive performance. We also know that inadequate BCS at calving can result in lower milk yield and decrease reproductive performance. It is clear that there is an optimum for the range among cows within a management group. And, variation among cows should be minimized by focusing attention on cows in late lactation.

Garnsworthy’s recommendation is consistent with the theory that feed intake of cows in the transition period is controlled by hepatic oxidation of fatty acids. Cows with greater BCS will mobilize more fat and have greater plasma non-esterified fatty acid (NEFA) concentrations for a longer period of time. According to the hepatic oxidation theory, uptake and oxidation of this mobilized fat in liver suppresses feed intake decreasing energy intake and extending the period of negative energy balance.

A couple of decades ago we thought that cows needed more condition at calving to provide energy while feed intake was suppressed postpartum. So, a BCS of 3.5 to 4.0 was often recommended. Since then we have realized that fat mobilization is the main reason that feed intake is suppressed and we have recommended lower BCS at calving. As more information becomes available, recommendations for optimal BCS at calving may be fine-tuned further.

In contrast to summer 2010 milk fat was low across the country, by late 2010 dairy producers and nutritionists in Michigan reported that with the new corn crop, milk fat percent was more normal and milk production was lower than expected. Much of the 2010 corn silage crop was harvested too dry and mature. Dry mature corn silage can result in lower fiber and starch digestibilities, which significantly affect milk production and milk fat test. Corn silage neutral detergent fiber (NDF) digestibility can vary by more than 20 percentage units. Each unit of forage NDF digestibility lost results in about 0.5 lb loss of 4% fat-corrected milk yield. Fiber digestibility cannot be compensated for by replacing it or supplementing other ingredients so it is important to select corn silage hybrids with high NDF digestibility and harvest at proper moisture content. Lower starch digestibility in corn silage can be compensated for by adding additional starch to the diet or generally by grinding available corn grain finer.

It was noted that corn crop harvested in fall 2010 may be beneficial for fresh cows and maintenance cows (to maintain BCS at target values given level of milk production). They do not need much highly fermentable dietary starch sources. When making nutritional changes to the milking herd ration with the goal of increasing milk components or milk yield do so gradually so that rumen microbes have time to adapt. Although reaching your target may take several weeks, movement in the right direction may be detectable within the first week of implementation. 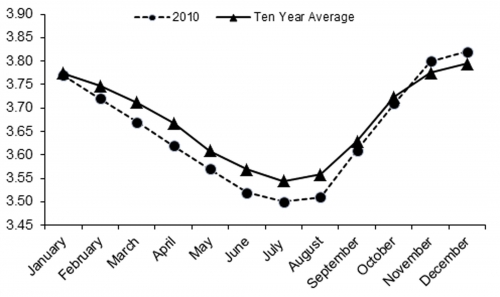 The higher than usual milk fat concentration seen this past winter is in stark contrast to the issue of low butterfat test seen during most of 2010 across the country. The figure on the right illustrates the low milk fat test during 2010 that was observed not only in Michigan, but in the whole United States. From February through October 2010, monthly butterfat percentage averages in the Mideast Federal Milk Marketing Order ranged from 0.4 to 0.9 % below the 10-year average for those same months. Although the exact reason for the struggle has not been pinpointed, it probably has to do with poor forage growing conditions in 2009.

Concerns about high iron concentrations in drinking water were raised in some Roundtables. Higher concentrations [such as 2 to 10 parts per million (ppm)] may be a problem by reducing water and feed intake, milk yield, immune function, reproductive performance, and absorption of copper and zinc. These problems can be magnified during stress associated with transition of fresh cows. Additionally, high iron is implicated in reduced water intake. When stumped by the reason for lower than expected milk yield and health problems, dairy nutritionists and producers are sampling and checking water to see if high iron might be a contributing factor.

Unfortunately, we don’t know the upper threshold at which iron in drinking water is likely to be a problem. Recommended maximum tolerable concentration generally listed by analytical laboratories is 0.3 ppm. This apparently was derived as an acceptable level for palatability in humans. However, the actionable negative iron threshold in drinking water for dairy cattle is unknown. Typically, in most rations plenty of iron is present to meet cows’ requirement, even though the form of iron (ferric: Fe+3) is only about 10% absorbable. In contrast, iron (ferrous: Fe+2) in drinking water is highly soluble and presumed to be nearly 100% absorbable, probably increasing the risk for problems.

Experience in field cases in the last several years suggests improvements in milk yield and cow health when excess iron is removed from drinking water or a different water source with low iron is used.

Fortunately, excess iron in drinking water is relatively easy to detect with a standard laboratory analysis and corrective action can then be taken relatively easily. Options are:

The simplest way to oxidize ferrous iron is by exposure to air (oxygen) such as with an ‘iron curtain’. Cost-effective water treatments include hydrogen peroxide or chlorination to oxidize ferrous iron to ferric iron followed by mechanical filtration. Other methods (such as ozonation, reverse osmosis, or an oxidizing filter) or really fancy water treatment systems can react and remove iron also, but careful assessment of installation and operating costs are very highly recommended. These guidelines on how to take a drinking water sample and standard water analysis can help.