See the table below for actual population and results for individual years. In determining per acre seed costs, a 140,000 seed count bag price of $70 was used. As you can see, at that price, each 20,000 unit increase in seeding rate resulted in a $10 increase in per-acre costs.

Below is a graphical representation of the data above. As you can see, soybean yield plateaus at about 130,000 seeds per acre. At lower seeding levels, incremental yield increases rapidly and levels off at 130,000 plants per acre. 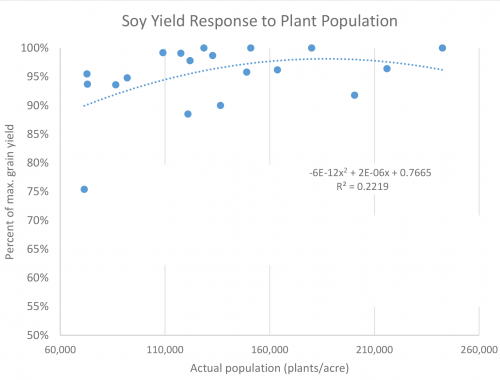 It should be noted that these studies were conducted on high-yielding, well-tiled, finely-textured soils in the Thumb. The Michigan Soybean Promotion Committee provided funds that made these studies possible.