MSU researchers recently were awarded a total of $1 million in grant funding to prevent and control invasive species in Michigan, including hemlock woolly adelgid.

National Invasive Species Week 2017 is Feb. 27 to March 3. Invasive species are plants, animals, and other organisms that are not traditionally found in a given location (in this case the Great Lakes) AND are having a negative impact of some kind, whether ecological, economic, social, and/or a public health threat.

To help bring awareness to these threats, Michigan State University Extension and Michigan Sea Grant are featuring articles on invasive species that have invaded or have the potential to invade Michigan’s environment. This article features the terrestrial invasive species hemlock woolly adelgid (HWA).

What Michigan is doing to battle invasive species: Michigan is committed to detecting and preventing the spread of invasive species throughout the state. In fact, in the last few years, significant investments in the fight to prevent and control invasive species have been made through the state’s departments of Environmental Quality, Natural Resources, and Agriculture and Rural Development via the Michigan Invasive Species Grant Program. Since the grant program began, more than $11 million has been awarded in grants to local governments, nonprofits and institutions for management, education and outreach and innovative control methods.

This year, just over $3 million in grants was awarded to 17 projects across the state. This funding includes the work of several Michigan State University researchers, who were awarded a total of $1 million in grant funding to prevent and control invasive species in Michigan. Their projects include work on two invasive species, hemlock woolly adelgid (HWA) and oak wilt, which are important pests that affect trees in forests and landscapes. Another project focuses on improving an existing tool used to detect, identify and manage invasive species.

Amos Ziegler, academic specialist in the MSU Department of Entomology, coordinates the Midwest Invasive Species Information Network (MSIN) for citizen scientists to detect, identify and better manage invasive species. Ziegler and Michigan Natural Features Inventory scientist Phyllis Higman, will look at the gaps in strategic action areas of monitoring and education. They will also look at maintaining the existing data, sharing the infrastructure and provide improvements that can have immediate impacts on early detection and response efforts.

Research by MSU Department of Entomology and Department of Forestry Dr. Deb McCullough and her collaborators, including Dr. Jeff Andresen, Dr. Phoebe Zarnetske and Dr. Nina Lany, will focus on HWA, a tiny, aphid-like insect that threatens more than 150 million hemlock trees in Michigan forests. The team will determine how cold temperatures and microclimate differences affect survival of HWA. These insects are unique because they feed throughout the winter. If temperatures get cold enough, a high proportion of the insects can be killed. Whether the HWA die, however, may depend on their location in the state and even their location on a tree. For example, HWA insects on low branches may be protected from severe cold by heavy snow, while the insects on a north-facing branch near the top of the tree might be killed. The team will also use several data sets and field surveys to improve information about the distribution of hemlock trees across the state. These results will be combined to generate hazard maps to identify areas where HWA is likely to thrive and eventually kill most of the hemlocks, along with areas where frequent cold winter temperatures may limit HWA populations and their damage. Their work will help forest managers, wildlife biologists, and property owners prioritize their survey efforts and develop long-term plans for dealing with this tree-killing invasive pest.

Description:  These tiny insects are found at the base of needles on hemlock shoots. The adelgids are immobile for most of their life span. They feed by piercing the base of the needle and sucking nutrients carried within the shoots. As they feed, the adelgids secrete white wax – the “wool” - from pores on their bodies. This white wax, called ovisacs, surrounds and protects each insect.

Similar species: HWA is similar to pine bark adelgid (Pineus strobi (Hartig). Pine bark adelgid is also invasive but has been present in Michigan for many years. Pine bark adelgid feeds on white pine trees, producing white wax (“wool”) on the bark of the trunk and branches. Fortunately, pine bark adelgid rarely causes significant damage to white pine trees. Another invasive pest, elongate hemlock scale (Fiorinia externa Ferris) is often found in western lower Michigan on hemlock trees, including trees that are also infested with HWA. The hard yellowish scales will be on the needles, whereas HWA are covered with white wax and will be only at the base of the needles.

Origin: The hemlock woolly adelgid is native to Asia (Japan and China).

How it came to Michigan: Hemlock woolly adelgid was first detected in the eastern US in 1951 when infested trees were discovered in Virginia. Natural dispersal of HWA is slow relative to most other insects. Very young adelgids may be blown by wind or carried by birds but the adult adelgids do not fly. Long distance spread has resulted from people transporting infested hemlock nursery trees into new areas. In the eastern United States, HWA has killed thousands of hemlock trees in forests and landscapes. This USDA Forest Service map shows the known distribution of HWA in 2015.

How long it has been in Michigan:  Established infestations of this invader were not known to be present in Michigan until 20 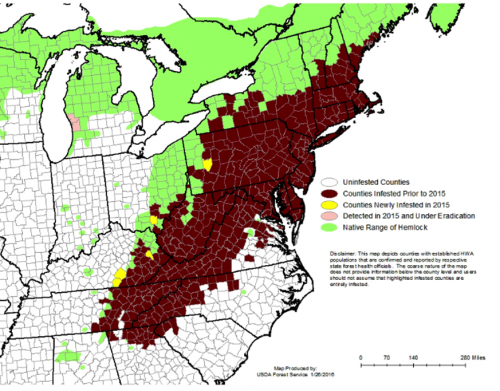 15, when localized populations of HWA were discovered near the Lake Michigan shoreline. Although hemlock trees in landscapes can be protected with systemic insecticides, “more than 150 million hemlocks in Michigan forests are threatened,” McCullough said.

Extent of range in Michigan: The Michigan Department of Agriculture and Rural Development has mapped the infestation history of HWA in Michigan.

Why it is a problem: Eastern hemlock (Tsuga Canadensis) is an important tree in Michigan forests, including riparian forests that border streams and rivers. Hemlock is an especially valuable resource for wildlife. The dense canopies of hemlock trees provide important winter cover and shade for many mammals and birds. Hemlock is a popular landscape tree. Over time, HWA feeding reduces the health and vigor of the trees. Needles drop, buds die, the canopy becomes thin and the trees often take on a grayish-green appearance. In eastern states, hemlocks generally die within six to ten years of becoming infested. (state HWA bulletin)

How it is spread: Though HWA cannot fly, eggs and newly hatched adelgids can be blown by the wind or transported on birds, animals, or clothing. Long-range spread occurs when infested hemlock nursery trees are transported and planted by people into new areas.

A cool/unusual fact: Hemlock woolly adelgids are parthenogenic, which means every individual is female. Numbers can build up rapidly because there are two generations of HWA each year.

Management actions/options: Unfortunately, no native predators control HWA populations and there are no parasitoids that attack this pest. In eastern states, small predatory beetles from other US regions and Asia are being reared and released for biological control of HWA. To date, however, these predators have not slowed the rate at which hemlock trees die. Extremely cold weather in winter has caused HWA mortality in some locations. Because this insect is parthenogenic and has two generations each year, populations can build back up in years when winter weather is mild.