To help bring awareness to this week, each day Michigan State University Extension (MSU Extension) and Michigan Sea Grant are featuring two different invasive species (one aquatic and one terrestrial species) that have invaded or has the potential to invade Michigan’s environment. Today’s featured terrestrial invasive species is the Chinese yam.

Chinese yam (Dioscorea oppositifolia). Chinese yam is a terrestrial invasive vine that is currently on the Michigan Watch list. According to the Michigan Department of Environmental Quality, invasive species on the watch list are priority species that have been identified as being an immediate and significant threat to Michigan's natural resources. Watch list species either have never been confirmed in the wild in Michigan or have a very limited known distribution, or are localized. In the case of Chinese Yam, it has been detected in Michigan.

The Michigan Department of Natural Resources is currently featuring the Chinese yam as its invasive species of the month.

It has slender vines that spiral counterclockwise. Its leaves are pointed and heart-shaped and often indented on the sides. The bulbils or air tubers are present from June to September and resemble very small potatoes. It has small, white or greenish-yellow flowers that smell like cinnamon. It can grow in a wide range of light conditions but prefers intermediate light.

Native look-alikes and how you can tell them apart from Chinese yam:

This vine is similar to several species:

The Chinese yam is native to Asia.

Details of its introduction into the US:

Introduced in the 1800’s and has been recorded in some locations in Michigan.

How long it has been here:

According to MISIN, Chinese yam was introduced in the 1800’s.

Chinese yam has spread to 16 southeastern states, and has been detected in several locations in Michigan. The MISIN web site shows the latest locations where this plant has been observed in Michigan and across the United States. 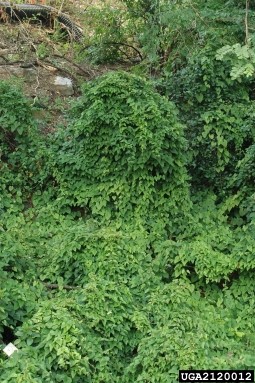 Because it grows and reproduces so quickly, Chinese yam can literally envelope the vegetation it comes across as it grows over it. It has the potential of growing to a height of up to 16 feet. It is a plant that could reduce plant diversity and threaten native ecosystems.

Chinese yam reproduces by seed. It also spreads via bulbil or small aerial tubers that are produced in the axils of the leaves during June to September.

Chinese yam is used as a food plant and in Chinese medicine.

Mowing or cutting will control the spread but this labor-intensive management regime must be continued until root reserves are exhausted. Uprooting and removal of roots and stumps can be effective if the population is low or located in environmentally sensitive areas. Mulching and herbicide application can also be used to manage Chinese yam.

Early detection and timely reporting of occurrences of Michigan watch list species such as Chinese yam are crucial to minimizing the spread and limiting negative ecological and economic impacts. Chinese Yam should be reported immediately to Sue Tangora, Michigan DNR Wildlife Division (tangoras@michigan.gov). Take several photos of the plant and make note of the location, date and time of the observation as this will be very helpful in the verification of the report. You may be asked to provide your name and contact information if follow-up is needed. You can also use the Midwest Invasive Species Information Network (MISIN) online reporting tool - http://www.misin.msu.edu/report/. MISIN also offers a smartphone app that allows convenient reporting from a phone.