To help bring awareness to this week, each day Michigan State University Extension (MSU Extension) and Michigan Sea Grant are featuring two different invasive species (one aquatic and one terrestrial species) that have invaded or has the potential to invade Michigan’s environment. Today’s featured terrestrial invasive species is the Kudzu.

Kudzu (Pueraria montana var. lobate). Kudzu is a terrestrial invasive vine that is currently on the Michigan watch list. According to the Michigan Department of Environmental Quality, invasive species on the watch list are priority species that have been identified as being an immediate and significant threat to Michigan's natural resources. Watch list species either have never been confirmed in the wild in Michigan or have a very limited known distribution, or are localized. In the case of Kudzu, it has been detected in Michigan.

Kudzu’s climbing perennial vines can extend 32-100 feet, and can contain up to 30 vines per plant. Its leaves are arranged in an alternate, compound leaf structure consisting of three broad leaflets. It produces reddish-purple individual flowers that grow in upright spikes in leaf clusters during late summer. It can grow in a wide variety of conditions and soil types, but prefers open areas with full sun. Kudzu produces dark brown, dry clustered flat legume seed pods covered with stiff golden-brown spreading hairs, each containing up to nine seeds.

Native look-alikes and how you can tell them apart from Kudzu:

This vine is similar to several species:

Currently, Kudzu primarily occurs in southeastern states, with reports in several northern states including but not limited to Michigan, North Dakota, and Oregon. The MISIN web site shows the latest locations where this plant has been observed in Michigan and across the United States. 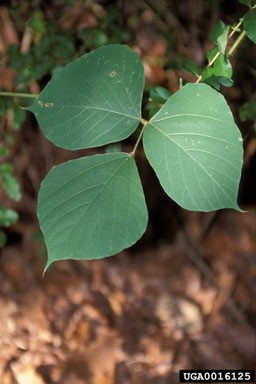 Once established, Kudzu can grow very rapidly, and has the tendency to smother and shade out native plants.

Kudzu spreads via seed, root expansion, and fragmentation. Roots develop from nodes, and form root crowns every one to two square feet.

Kudzu is a member of the Pea family, Fabaceae, and is capable of fixing nitrogen in the soil. It is also fire-resistant.

Though it has not yet been aggressive in Michigan, this may change due to climate change, and thus it is important to monitor open disturbed areas and forest edges. Plants should be hand-pulled if possible, taking care to remove the entire root crown. All plant material should be placed in a landfill or incinerator. Mowing, grazing or tilling multiple times over a growing season helps to deplete root storage, and can be more effective when done in conjunction with herbicide treatment. Established populations require higher herbicide application rates on cut stems, via basal bark treatment, and foliar treatment.

Early detection and timely reporting of occurrences of Michigan watch list species such as Kudzu is crucial to increasing the likelihood of stopping an invasion and limiting negative ecological and economic impacts. Chinese Yam should be reported immediately to Sue Tangora, Michigan DNR Wildlife Division (tangoras@michigan.gov). Take several photos of the plant and make note of the location, date and time of the observation as this will be greatly helpful in the verification of the report. You may be asked to provide your name and contact information if follow-up is needed. You can also use the Midwest Invasive Species Information Network (MISIN) online reporting tool. MISIN also offers a smartphone app that allows convenient reporting from a phone.