Each tool lists the predicted developmental stage of:

Predictions are based on weather data collected by local Enviroweather stations.

There are two different displays. They can be accessed via the “apple” menu on the commodity page.

The first tool, “current status of McIntosh and apple pests,” displays the current predicted developmental stage of the four insect pests and the apple crop, along with predicted harvest dates, (if bloom has already occurred). For example, below is a screenshot for the MSU Horticultural Research Farm on May 18, 2017. 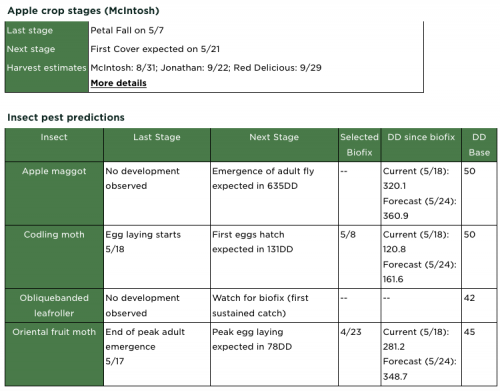 The second tool, “Seasonal history of McIntosh and apple pests,” shows the predicted timing of important pest stages during the season. For example, the screenshot below is the first part of the table for the same location for the 2016 growing season. 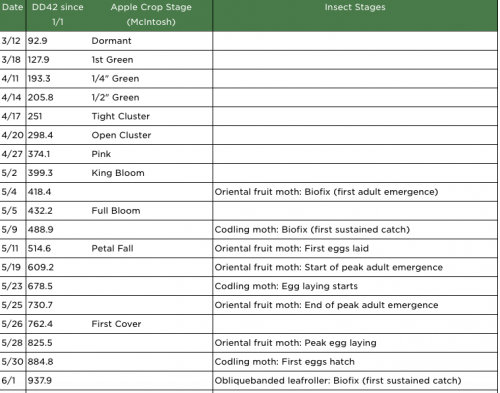 Each of these tools allows users to set a biofix for the insect pest. The biofix is an observable, biological event that can “reset” the predictions based on local conditions. The box above each table displays a default biofix that users can change based on their own observations.

These apple combined tools were developed in response to user feedback and the desire for an easy, one-stop page to view current status. Enviroweather partnered with the MSU Integrated Pest Management (IPM) Program in their NIFA USDA Extension IPM grant.

This material is based upon work supported by the National Institute of Food and Agriculture, U.S. Department of Agriculture, under Agreement No. 2015-09785.