Heidi Wollaeger joins the floriculture and nursery groups at MSU to assist the industries and deliver research-based information. 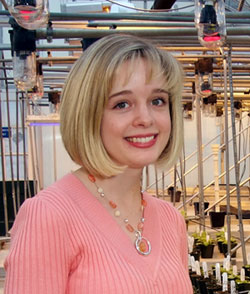 Michigan State University Extension has recently hired Heidi Wollaeger as an Extension educator who will focus on floriculture, greenhouse and nursery production. Heidi will primarily serve southwest Michigan with an emphasis on the dense concentration of commercial greenhouse producers in the Kalamazoo, Mich., area. Heidi will also participate in state-wide activities in coordination with other Extension educators and specialists on campus. Heidi joins Thomas Dudek (western Michigan) and Kristin Getter (eastern Michigan) as educators to serve Michigan’s $370 million floriculture industry as well as business that produce nursery crops.

Heidi received a Bachelor of Arts degree in biology from Wittenberg University in Springfield, Ohio in 2011 and just completed a Master of Science degree in horticulture at MSU. Working with Erik Runkle, her research focused on using light-emitting diodes (LEDs) to produce young plants with desired characteristics.

Heidi’s office will be in the Kalamazoo County Extension office on Gull Road in Kalamazoo, Mich. She officially starts her job on Aug. 27, 2013, but she’s already started making programming plans and further networking with MSU colleagues with extension and outreach responsibilities.

COVID-19: Where can agricultural employers go to stay current on the infectious disease caused by novel coronavirus?