New PGR Collate now registered in Michigan for greenhouse use

The plant growth regulator (PGR) Collate, which contains the active ingredient ethephon, is now available for greenhouse use in Michigan and most of the United States.

For years growers have used the plant growth regulator (PGR) Florel (Southern Agricultural Insecticides, Inc.) on ornamental crops to abort flowers and flower buds, inhibit extension growth, and promote lateral branching. Florel contains the active ingredient ethephon, which releases the plant hormone ethylene. It is labeled for application as a spray, but recent research shows that it can also be effective as a substrate drench. Now, another product that contains the same active ingredient as Florel is available.

Fine Americas, Inc. has developed Collate, which contains 21.7 percent ethephon, compared with Florel that contains 3.9 percent ethephon. Last year (2012), we compared Collate with Florel as a foliar spray and found that plants responded to the two products similarly. For example, petunia ‘Wave Lavender’ that was treated with two sprays of Collate or Florel at 250 to 750 ppm had similar growth and flowering responses (Figure 1). 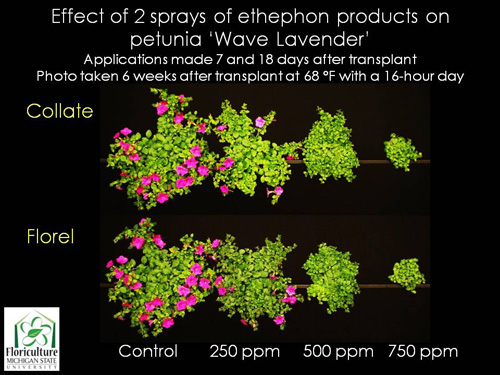 Collate was introduced in January 2013, but was not registered for use in Michigan or other states until recently. As of early April, Collate was registered in most U.S. states including Michigan and all of the Midwest.

More information on PGRs is available from Michigan State University Extension through the MSU Floriculture website.

COVID-19: Where can agricultural employers go to stay current on the infectious disease caused by novel coronavirus?