Planting nears completion in northwest Michigan. Only dry beans and a few soybeans are left to sow.

Northeast Michigan avoided the excessive precipitation that flooded much of the Lower Peninsula this week. In fact, many of our coarser upland soils could use some rain. Only 0.07 inches came in the misty drizzle we received Monday, June 10, into this Tuesday, June 11. However, relatively dry conditions brought many growers close to completing planting operations for the spring. Unplanted acreage will largely be dedicated to dry beans and a few more soybeans.

This weekend will bring a slight chance for scattered showers Saturday, June 15, and a significant chance of thunderstorms Sunday night through Monday, June 17. After Monday, skies will be partly cloudy, but rain is unlikely. Our spring rainfall total at the Hawks Enviro-weather station is now approximately 0.30 inches below the five-year average (6.69 versus 7.04 inches), despite the fact that we have received 20 more hours of rainfall than average. The 6-10 and 8-14 day outlooks from NOAA indicate a slight chance for above normal precipitation in coming weeks.

Average temperatures increased slightly over the last seven days from 55 to 66 degrees F. This Friday, June 14, will set us back a bit with highs only reaching the mid- to upper 60s. However, another gradual warming trend will advance through the weekend into next week, bringing highs in the upper 70s by Wednesday, June 19. GDD accumulations since March 1 total 1,332.9 base 32 F, 694.5 base 41 and 406.2 base 50. Much of northeast Michigan is approximately five calendar days ahead of the 30-year average for this point in the growing season. The 6-10 and 8-14 day outlooks from NOAA indicate that our region will likely experience above normal temperatures in coming weeks.

Winter wheat in our region ranges in development from boot stage to early flowering, with the majority of stands just beginning to head (Feekes 10 to 10.4). Flowering should begin in Presque Isle County in five to 10 days. Leaf diseases are starting to colonize flag leaves in some fields. As the upper-most leaf on the plant, closest to the sun and the developing wheat head, the flag leaf plays a very important role in grain fill. As much as 70 percent of the carbohydrate stored in wheat grain is synthesized by the flag leaf. Damage to the flag leaf from diseases or insects can result in yield loss of 5 to 15 bushels per acre. 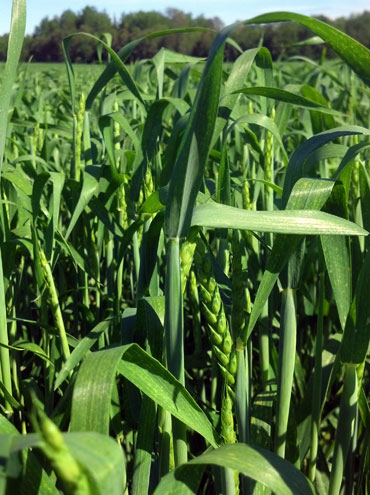 This year, growers in northeast Michigan are also concerned about the potential for significant Fusarium head blight (scab) pressure. Warm, moist conditions during flowering favor development of the disease, and models suggest that white wheat fields within several miles of Lake Huron are particularly at risk. Early flowering is the optimum time for single fungicide applications to protect both the flag leaf and the maturing head from common fungal diseases.

Alfalfa in the northeast is 24 to 37 inches tall. We have accumulated approximately 695 base 41 GDDs at the Hawks Enviro-weather station and are forecast to reach 849 by June 19. Bud development is beginning in some stands. Neutral detergent fiber concentrations (NDF) should be in the range of 42 to 44 percent. This stage of growth offers the ideal balance of hay yield and forage quality. Once forage species begin to flower, yield continues to increase while quality quickly declines.

Harvest for haylage is well underway in our region. A few growers have begun harvest for dry hay, but partly cloudy conditions and significant chances for rain in the forecast will likely encourage many to wait. Any delay in harvest will allow more time for alfalfa weevil feeding and crop injury. Unfortunately, most insecticides labeled for alfalfa weevil control have a preharvest interval of at least seven days, making treatment nearly impossible this late in the game.

Most corn in our region is emerged and ranges in development from the two-leaf to five-leaf stage (V1-V4). Earlier planted fields are further along in development, but are also just beginning to recover from the impact of cool temperatures and spring frost events. Plants that emerged in the last two weeks are darker in color and appear to be more vigorous. However, despite inferior crop conditions at this time, earlier planted corn will likely out-yield later seedings. The advantage of a couple extra weeks for crop growth frequently out-weighs any injury to the first few leaves.

Weed pressure is rapidly increasing in many fields. Glyphosate (Roundup) applications should be timed to control weeds before they reach 6 inches in height.

Soybean planting is nearly complete in northeast Michigan. Some growers are waiting to get into poorly drained fields. Others are putting away the planter. Emergence and early crop development are highly variable across the region, ranging from cracking to unfolding of the first trifoliate leaf. Cool and cloudy conditions late last week limited the efficacy of some early herbicide applications. Warmer temperatures in the forecast for next week should improve herbicide activity. For soybean acres yet to be planted, producers should consider planting a maturity group one unit shorter than normal.

The majority of our region’s potato crop is in the ground. Some of the earliest planted fields are beginning to emerge, but most of the crop will not be visible above ground for at least another week. The first report of Colorado potato beetle activity came into our Michigan State University Extension office late last week. Colorado potato beetles can be difficult to control due to their evolved resistance to multiple insecticides. Many producers apply systemic insecticides at planting. Foliar insecticides should be applied when the first generation of eggs are 15 to 30 percent hatched to target the susceptible larval stage.

Dry bean planting has begun in northeast Michigan. At least 100 acres should be seeded before the forecast rains this weekend.