Crop conditions in the northeast region are improving with warmer temperatures.

The last week has been dry across our region, aside from the approximate 0.09 inches of rain that came in a quick downpour late this Tuesday morning (June 25). Growers have made significant progress with field work as a result. Soil moisture in upland areas is slightly less than ideal. The potential for showers and thunderstorms will increase over the next couple of days. Northeast Michigan may receive another 0.25 to 0.5 inches of rain before an upper air trough forms over the Great Lakes this Sunday (June 30). That system is expected to stick with us through the first week of July, bringing more stable conditions including several days without a significant chance for precipitation. The 6-10 and 8-14 day outlooks from NOAA suggest that precipitation levels will be near normal in coming weeks.

The last week included several days with above normal high temperatures in the mid- to upper 80s. Some areas reached the low 90s on Monday (June 24). Soil temperatures climbed into the upper 60s. The warmer conditions greatly improved crop conditions and growth. Temperatures should be more stable and seasonable over the next seven days, with highs in the mid- to upper 70s and nighttime lows in the mid-50s. GDD accumulations since March 1 total 1,820.4 base 32 degrees Fahrenheit, 1,047.7 base 41F and 647.6 base 50 F. The 8-14 day outlook from NOAA indicates that our region will likely experience near normal temperatures in the coming weeks.

Most winter wheat in our region has finished flowering and is now entering the grain fill stage of growth (Feekes 10.54-11). Many growers made fungicide applications during flowering to protect the developing heads. Despite initial concerns about the potential for Fusarium head blight (scab) along the shore of Lake Huron, none has been reported. Aphid pressure remains extremely low and lady beetles are doing a good job of controlling the few individuals that are present. According to Michigan State University Extension, grain fill and ripening can last as long 35 days under ideal conditions, but is often shortened by environmental stresses like heat and drought. Because kernel size and weight are determined during this stage, a longer grain fill period usually results in higher yields. Moderate temperatures and precipitation expected over the next couple of weeks should get grain development off to a good start.

Alfalfa. Many forage producers in the northeast have begun to harvest their first cutting of dry hay. The last week provided a six-day weather window from Wednesday, June 19, through Monday, June 24. Unfortunately, quite a bit of cut forage got rained on this Tuesday (June 25) while curing in the field. Some growers that took their first cutting early have reported significant alfalfa weevil damage to the new growth. At this point in the season, an insecticide application is warranted if feeding damage is apparent on 50 percent of the regrowth or more than six weevils are found per square foot. Uncut alfalfa is now 33 to 40 inches tall and flowering. Neutral detergent fiber concentrations (NDF) are above ideal levels at 46 to 48 percent. Cool season forage grasses are entirely headed and timothy is flowering.

Corn in our region ranges in development from the two-leaf to six-leaf stage (V2-V6). Root growth, nutrient uptake and leaf color are generally improving thanks to warmer air and soil temperatures. Those fields that are not greening-up are beginning to show signs of specific nutrient deficiencies. Leaves striped with interveinal chlorosis point to the low concentrations of sulfur, zinc and manganese available in our sandy, alkaline soils. Some of the symptomatic plants may continue to improve with warmer temperatures and organic matter cycling. Otherwise, timely application of a micronutrient fertilizer package can correct the problem. Many growers are applying herbicide, mostly glyphosate, some tank-mixed with atrazine or metolachlor. A few stands have sustained injury from wind and blowing sand. 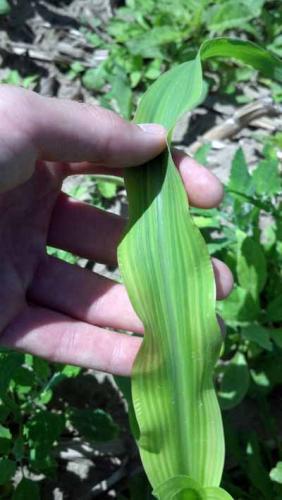 Soybeans are mostly emerged, but crop development remains highly variable across the region and within individual fields. The earliest soybeans have three fully emerged trifoliate leaves while other plants just sprouted. Most of this variation appears to be related to shifting spring soil conditions rather than seedling diseases. However, growers noticing emergence or stand establishment issues should scout for signs of pre- or post-emergent damping off and root rot. Broadleaf weeds are 2 to 5 inches tall in many fields and herbicides are being applied. Deer damage is apparent in some areas.

Majority of potatoes have sprouted and are beginning the vegetative stage of growth. Some producers have already made their first pass post-planting to cultivate and inject fertilizer. The first generation of Colorado potato beetle larvae is in its second instar on volunteer and home garden potato plants. The beetles have not yet made their way into this year’s commercial crop. As forage cutting continues, leafhoppers will begin to make their way into potato fields. Hilling will commence in the next couple of weeks. 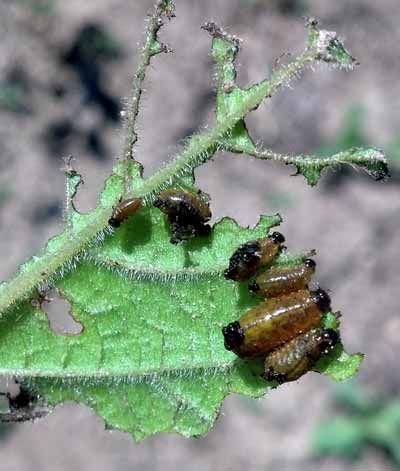 Dry bean planting is complete and development ranges from crook stage to two trifoliate leaves. Later planting allowed dry beans to emerge much quicker and more evenly than other crops. Crop condition is generally good, but potato leafhopper numbers are increasing. Western bean cutworm traps were set in fields this week from Moltke southeast to Lachine.