Approximately 0.74 inches of rain fell in scattered events throughout last weekend. No measurable precipitation has occurred since Sunday (June 2). Growers were able to return to fieldwork beginning Tuesday (June 4). Low lying areas remain wet due to cool and cloudy conditions, preventing any tillage or planting operations. An area of low pressure is moving our way from the Rockies and will bring with it a significant chance for precipitation Sunday evening (June 9) into early next Monday. Rainfall totals from that system are forecast to be 0.5 inches or more. After Monday (June 10), the weather should clear, giving the region a week-long window of dry conditions suitable for fieldwork. The 6-10 and 8-14 day outlooks from NOAA suggest that precipitation levels will be near normal in coming weeks.

High air temperatures climbed into the high 80s late last week before falling significantly Saturday evening (June 1). Lows Sunday and Monday night (June 2-3) came within two degrees of freezing. The first half of this week was unseasonably cool with highs in the 60s. A slight warming trend is expected to kick-off next Tuesday (June 11), bringing temperatures in the low 70s through next weekend.

GDD accumulations since March 1 total 1134.6 base 32 F, 566 base 41 and 328.2 base 50. Much of northeast Michigan remains three to five calendar days ahead of the 30-year average for this point in the growing season. However, this statistic does not seem to coincide with the slow progress of crop development in most fields. According to Michigan State University Extension’s agricultural meteorologist Jeff Andresen, there are two main reasons for this. First, many crops were planted later than normal this year due to cool, wet weather. Secondly, many growers are comparing this year’s crop with recent years that have been unusually favorable for early crop development. The 6-10 and 8-14 day outlooks from NOAA indicate that our region will likely experience more normal temperatures in coming weeks.

Most of the winter wheat in northeast Michigan has the last leaf, known as the flag leaf, visible at the top of the plant. Some stands have reached the boot stage with the developing head beginning to swell within the leaf sheath. Head emergence should begin very soon.

Uneven color, an indication of nutrient deficiencies, continues to be an issue in some fields. Signs of fungal leaf disease, including Septoria and powdery mildew, are present in other areas. A few growers have gone ahead with early fungicide applications. Others are waiting until the plants begin to flower. One case of symptoms similar to early Septoria was identified instead as bacterial mosaic. Producers with unidentified wheat issues can contact the Presque Isle County Extension office for information on free diagnostic testing through a partnership between MSU and the Michigan Wheat Program.

A few late herbicide applications are being made. Growers should weigh weed pressure in the field against the potential for crop injury as we move beyond the labeled application window for wheat herbicides and enter the reproductive stage of wheat development.

Alfalfa in our region is 16 to 28 inches tall. We have accumulated approximately 566 base 41 GDDs at the Hawks Enviro-weather station and are forecast to reach 700 by June 12. I have still not observed any bud development in Presque Isle County. Neutral detergent fiber concentrations (NDF) should be in the range of 37 to 38 percent.

There are reports that a few growers in the Posen, Mich., area have begun cutting. Much of this forage is likely going to be processed as haylage as we have not had the warm, dry weather necessary for curing baled hay. Harvest for hay should begin next week with a stretch of favorable conditions in the forecast.

Tip feeding injury from alfalfa weevil is increasing. Populations are nearing threshold in some stands. However, most growers in our region should be able to avoid an insecticide application by taking their first cutting before weevil populations reach threshold. Producers are beginning to look at herbicide options for new seedings and should be aware that there are very few products available for alfalfa and other forage legumes seeded with oats. For more information, consult MSU Extension’s 2013 Weed Control Guide for Field Crops. 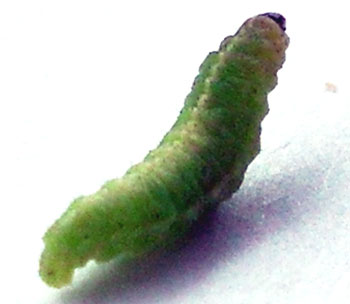 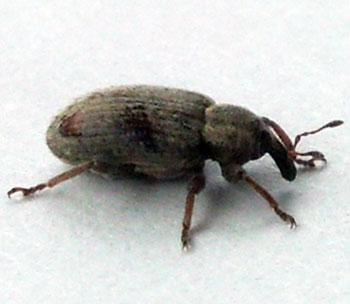 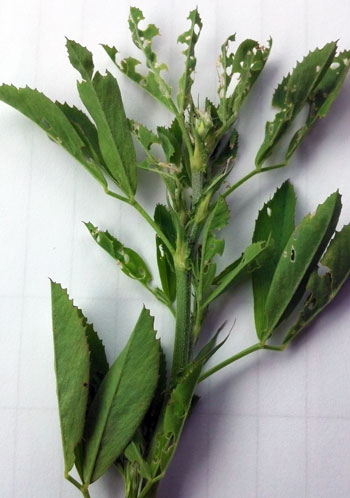 Nearly all of northeast Michigan’s approximately 47,000 corn acres have been planted. Much of the crop has emerged and ranges in development from spiking to three true leaves (VE-V3). Emergence appears to be uniform in most fields, but the young plants are generally light in color with some leaf tips browned by frost. The lack of green color is likely the result of cool soil temperatures limiting root growth and nutrient uptake. Crop condition and development should improve with the slightly warmer temperatures forecast for next week. The southern part of the state is reporting some black cutworm damage. Growers should consider scouting their fields to look for wilted or cut plants and cutworm larvae.

Soybeans are approximately 60 percent planted in our region. Planting of lower fields with heavier soils has been delayed by weather. Our local row spacing trial comparing 8-, 16- and 24-inch rows went in this week. Many earlier planted stands have emerged and range in development from just cracking through to fully unrolled, unifoliate leaves (VE-VC). Emergence has been inconsistent in some areas due to excessive moisture and variable temperatures. Growers should scout their fields to check emergence, stand count and weed pressure beginning seven days after planting.

Early herbicide applications are being made to no-till fields and other areas where pre-emergent weed control was limited. For soybean acres yet to be planted, growers should be safe to plant a full-season soybean through the first week of June. If the weather delays planting until the second week of June, producers should consider planting a maturity group 0.5 or 1 unit shorter than normal.

Potato growers in northeast Michigan have nearly completed their planting operations. Roughly 2,000 acres are dedicated to potato production in our region, much of that concentrated in Presque Isle County. I have not seen any shoots emerging yet, but the earliest planted fields should be breaking through soon.

As growers begin to consider weed control in other crops, they are reminded that glyphosate can injure potato plants. Seed potato crops are especially vulnerable as the developing daughter tubers can store glyphosate residues until the next season and have emergence problems when planted. Glyphosate applicators can help protect Michigan potatoes by being aware of where potatoes, particularly seed potatoes, are being produced, checking sprayer set-up and environmental conditions before applying glyphosate near potato fields, and thoroughly cleaning and rinsing spray tanks before they are used in potatoes.