A cold, wet Mother’s Day weekend halted fieldwork across the northeast, but temperatures will continue to recover over the next seven days.

Unseasonable snow flurries and freezing temperatures hit northeast Michigan last weekend, bringing spring fieldwork to an abrupt halt. The air temperature on Mother’s Day (May 12) only reached 39 degrees and the average soil temperature at 4 inches sunk to 47. Early planted corn, though not yet emerged, may have been exposed to chilling injury. However, temperatures have slowly recovered throughout the week and are expected to hit the high 70s by Monday (May 20). Depending on how quickly soils dry, growers may be back in the field this weekend.

Precisely 1.47 inches of rainfall was recorded at the Hawks Enviro-weather station since last Thursday (May 9). Lighter ground needed this shot of moisture, but it will keep equipment off of heavier soils for at least a couple of days. Total precipitation since March 1 (5.45 inches) is nearly 1 inch above the five-year average of 4.53 inches. We have seen approximately 149 hours of rainfall in that same period compared to the five-year average of 102 hours.

The near-term forecast includes a 30 percent chance of precipitation the evening of Monday, May 20, increasing to 60 percent by mid-day Tuesday and continuing into Wednesday. This weekend may offer a short window for fieldwork prior to those forecast events. However, the 6-10 and 8-14 day outlooks from NOAA suggest that recent rains are only the beginning of a wetter trend that will continue with above normal precipitation in coming weeks.

High air temperatures over the last week covered a broad range from 39 to 76 degrees Fahrenheit with nighttime lows between 29 and 44. GDD accumulations since March 1 total 621.1 base 32 F, 292.7 base 42 and 157.7 base 50. Despite the recent cold snap, much of northeast Michigan remains approximately five calendar days ahead of the 30-year average for this point in the season. This is good news for wheat and alfalfa producers, but precipitation has prevented the planting of other crops that might have otherwise taken advantage of the additional heat units.

Daytime high temperatures will jump into the low 70s beginning Friday (May 17) and continue to increase until a system moves through Monday night. The 6-10 day outlook from NOAA indicates that temperatures will be above normal a week from now, but the 8-14 day forecast contradicts this, suggesting near to slightly below normal temperatures.

Winter wheat in our region is entering the stem extension phase of growth (Feekes stage 5-6). This is a critical time for weed control decisions as many herbicides labeled for use in winter wheat cannot be applied after Feekes stage 5 without risking crop injury and yield loss. A few fields have already received herbicide applications. For detailed information on weed control in wheat, see the Michigan State University Extension 2013 Weed Control Guide for Field Crops.

Early season nitrogen applications are approximately 80 percent complete. Fields that have not received nitrogen are beginning to look pale and lag behind in growth. Elsewhere in the state, growers are reporting aphid and Septoria leaf blotch pressure, though none has been observed or reported in our region. No true armyworm moths have been trapped at our monitoring site in Presque Isle County.

Alfalfa is beginning to recover from its late start. Plants are 6 to 11 inches tall and have six to nine trifoliate leaves. Growers are applying potash and other fertilizer to established stands. No alfalfa weevil issues have been observed, though some other insect feeding damage has shown up in a few fields, perhaps caused by cutworms. New stands seeded over the last few weeks are emerging. Further planting will likely be delayed until the weekend at least. Cool season forage grasses are 7 to 9 inches tall.

Many stands of oats have emerged. The young plants can tolerate temperatures as low as 28 F and were therefore not injured by the cold weather last weekend. All of the rain we have received recently should encourage the crop’s development. 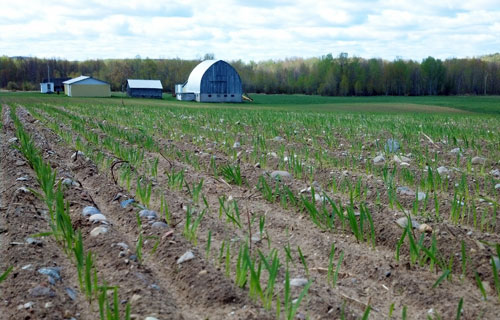 A few growers planted corn early last week on high ground. None had emerged in time to be fully exposed to the cold weather last weekend. Still, soil temperatures below 50 F can injure germinating seedlings. Over the next few days, growers should carefully evaluate fields planted last week for emergence and seedling vigor. Extreme cases of seedling injury may warrant replanting. Statewide, 32 percent of the anticipated corn crop is in the ground. This reflects dramatic progress in planting made early last week, which took us from only 5 percent planted on May 5 to our current position. Michigan is now ahead of many Corn Belt states in planting progress.

No potatoes, soybeans or dry beans have been planted in northeast Michigan.