Growers pushed to plant multiple crops last weekend before the rains hit. Now, it’s all about waiting out the weather.

Soil conditions were nearly ideal last weekend, allowing growers to make significant progress in preparing fields and planting their crops. Fieldwork resumed in earnest Wednesday (May 22) following an early morning shower the day prior. Tillage and planting continued through this Monday morning (May 20), with growers rushing to cover a few more acres before the forecast rain.

A rotational low pressure system moved through the Great Lakes region during the middle part of this week, with 1.5 to 2 inches of rainfall between Monday evening (May 20) and Thursday morning (May 23). This has kept producers out of the field, but should help to germinate seeds planted over the weekend. A few low areas have standing water, though most of the new crop seems to have escaped being washed out. The present system will move out of our area this afternoon (May 23), allowing a high pressure trough to work in from the west.

The holiday weekend should be clear and dry. Our next chance for rain will come the evening of Tuesday (May 28) into Wednesday morning. The May rainfall total at the Hawks Enviro-weather station is approximately 1.3 inches above the five-year average. The 6-10 and 8-14 day outlooks from NOAA indicate a high probability for above normal precipitation in coming weeks.

Last weekend felt hot, but the cold front that dominated our weather this week pushed temperatures down dramatically. As a result, high air temperatures since last Thursday (May 16) have covered a wide range from 53 to 81 degrees Fahrenheit. Nighttime lows have been between 35 and 51. GDD accumulations since March 1 total 803.8 base 32 F, 378.0 base 41 and 211.6 base 50. Most of northeast Michigan remains approximately one calendar week ahead of the 30-year average for this point in the season.

There is a chance of frost in the forecast for Thursday night of this week (May 23), with a frost advisory in effect until 8 a.m. Friday. Low lying inland areas are most at risk. Winds out of the southwest will cause high temperatures to climb over the weekend, reaching the mid- to upper 80s by next Tuesday. The 6-10 and 8-14 day outlooks from NOAA indicate that our region will likely experience above normal temperatures in coming weeks.

Many winter wheat fields are showing uneven signs of nitrogen stress as stem extension continues (Feekes stage 6-7). Whether fertilizer was applied early or late, many fields appear to have experienced some nitrogen loss. Streaks or patches of light-green have some growers considering additional fertilizer. Likely micronutrient deficiencies are also becoming apparent as yellowing in newer leaves.

Other irregular areas showing up in wheat stands may be pest related. I observed what looked to be Septoria leaf spot in one field this week, still to be confirmed by the lab. Septoria fungus commonly infects wheat following cool, wet weather in the early season. The first two true armyworm moths of the season were trapped this week at our monitoring site in Presque Isle County. Michigan State University Extension recommends growers scout their fields for insects and leaf diseases to begin formulating a control plan, if needed.

Alfalfa in the northeast is a little better than halfway to first cutting. Plants are 6 to 14 inches tall. We have accumulated approximately 378 base 41 GDDs and are forecast to reach 453 by the end of the month. Growers in the south central part of our region are hoping to take their first cutting in the next week to 10 days. Fields closer to the lake may not be cut until the second or third week of June. Seeding of new stands continued through last weekend. Nurse oats are emerging in recently planted fields and look healthy.

Early planted corn is also beginning to emerge, as much as 16 days after seeding. Emergence appears to be quite uniform and the seedlings are not showing any signs of cold injury. Planting continued last week and progressed rapidly over the weekend. Statewide, 78 percent of the anticipated corn crop is in the ground. I would estimate that northeast Michigan is also about 80 percent planted, with some growers changing their focus from corn to soybeans. 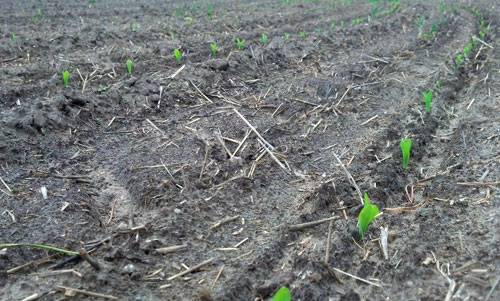 Many acres of soybeans were sown last week. Soybeans are an increasingly popular crop among growers in our region. Those not producing corn this year were able to dedicate the most recent planting window entirely to soybeans. One grower I spoke with put in 300 acres between last Wednesday and this Monday. Nothing had emerged as of this Tuesday, but soybeans will likely break through over the weekend.

Potato growers reported planting their first few acres late last week. One producer expected to have 50 acres in by the end of last Friday, following an early planter breakdown. Planting continued through last weekend, and will hopefully be able to continue early next week.