Seedbed preparation is underway in northeast Michigan with corn planting just around the corner.

What a difference a week can make. The recent upswing in temperatures has dried coarser, upland soils across the northeast and fields are quickly greening-up. Although scattered rain events continue to keep lower areas too wet for field work, producers are on the move. High ground is being worked and receiving fertilizer. If the weather holds out, corn planting will begin this weekend.

There were four wet days in the last week, though precipitation amounted to only 0.30 inches. This topped off the April rainfall total at 2.81 inches, leaving us just above the five-year average of 2.69 inches. The 6-10 and 8-14 day outlooks from NOAA indicate that northeast Michigan will experience near normal precipitation in coming weeks. The greatest chances of rain in the next seven days will occur the evenings of Thursday (May 2), Sunday (May 5) and next Tuesday night (May 7). However, the likely hood of these events is only 20 to 40 percent and Michigan State University Extension’s agricultural meteorologist Jeff Andresen has forecast less than 0.25 inches of total precipitation, if we get rain at all.

High air temperatures over the last week have ranged from 44 to 88 degrees Fahrenheit with nighttime lows between 25 and 61. The average temperature for the last week was 54 F. This is a significant increase from the week prior, which averaged 38 degrees. Growing degree days (GDD) have accumulated more quickly with this increase in temperature.

Accumulations since March 1 total 348.6 base 32 F, 139.5 base 42 and 69.9 base 50. We are still about five calendar days behind the 103 base 50 GDD average for this point in the season, but the couple of warm days this week helped plants catch up a bit. We can expect more moderate daily highs near 60 degrees F in the near term. The medium range outlooks from NOAA suggest that temperatures will be slightly below normal over the next few weeks, but the current pattern is quite unpredictable.

Winter wheat is quickly greening up in response to the warmer weather. Most stands range in development from Feekes stage 3 to stage 4. Nitrogen is being applied as fields dry, with approximately 60 percent of early-season applications complete. Some growers have decided to apply all of their nitrogen in one pass rather than splitting applications due to the late start this year. 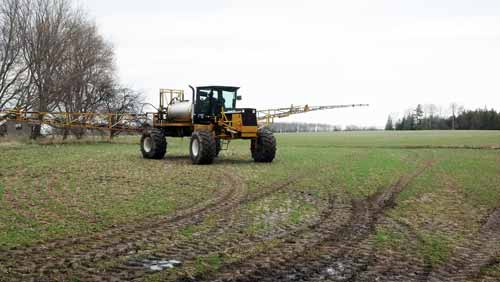 Average soil temperatures are now hovering around 50 F, which is encouraging new root growth. Winter annual and biennial weeds are also taking off. Significant chickweed pressure has been observed in some fields while others remain quite clean. No true armyworm moths have been trapped at our monitoring site in Presque Isle County. However, a few have been reported in the far southern Lower Peninsula, suggesting that their flight north has begun.

Alfalfa has broken dormancy in the northeast. Most stands seem to have come through the winter with little injury, though some damage is visible in low spots due to excessive moisture. Many plants have two or three trifoliate leaves. First cutting will likely be delayed by a week or two this year. MSU Extension recommends beginning harvest of dairy quality alfalfa at 750 base 41 F GDD. A few growers were able to seed down new stands over the last week. 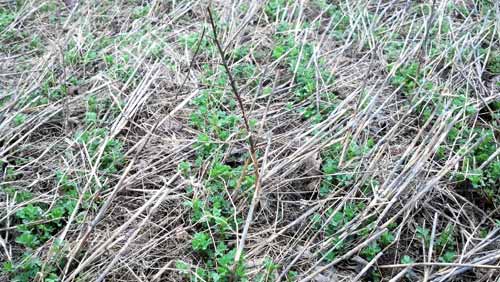 Oats have been sown in a few fields. Most were planted as a nurse crop for alfalfa, some as a rotational crop in last year’s potato fields.

There are rumors swirling that a few acres of corn were planted this week in western Presque Isle County. Confirmed reports indicate that a number of growers plan to begin planting corn on higher, drier ground this weekend. More wet weather is expected across the nation’s Corn Belt, which will further delay planting. This could mean lower yields or fewer corn acres than anticipated in states like Iowa and Illinois.

No potatoes, soybeans or dry beans have been planted in northeast Michigan.