Memorial Day weekend was clear and dry, allowing many growers to wrap-up corn planting and make significant progress with other fieldwork. Cool temperatures have slowed the drying of heavier soils and hindered early crop development.

The last week brought relatively little precipitation to northeast Michigan. Growers took advantage of this brief break in our wet spring and made significant progress in planting and other fieldwork over the holiday weekend. Approximately 0.18 inches of rain fell Tuesday evening (May 28) and stalled things yet again. However, some producers used the day to prepare seed potatoes for planting.

A cold front will approach from the west tomorrow (May 31), bringing with it prolonged chances for rain and thunderstorms over the next few days. Rain totals will likely be less than a half inch, but some of the storms could include severe weather. The 6-10 and 8-14 day outlooks from NOAA suggest that precipitation will be near to slightly above normal in coming weeks. Spring rainfall totals for our region are approximately 1 inch above the five-year average, with 150 hours of rain versus the 107-hour average for this point in the season.

High air temperatures hovered in the 50s and 60s over most of the last week, slowing the drying of heavier soils and hindering early crop development. Temperatures fell to 32 degrees Fahrenheit early last Saturday morning (May 25), causing minor frost injury in some early planted corn. A warm-up began this Wednesday (May 29) and will peak today (May 30) with highs in the mid-80s. The looming cold front will cause temperatures to drop over the weekend, but things will level out early next week with highs in the upper 60s.

GDD accumulations since March 1 total 954.7 base 32 F, 439 base 41 and 259.4 base 50. Following a cool week, parts of northeast Michigan near Alpena County are now one to three calendar days behind the 30-year average for this point in the growing season. However, the majority of our region is just about on target with the average. The 6-10 and 8-14 day outlooks from NOAA indicate our region will likely experience near to slightly above normal temperatures in coming weeks.

Most winter wheat in our region now has two nodes visible on the main stem. Some stands are beginning to push out their final leaf before heading, known as the flag leaf (Feekes stage 7-8). The developing head can be observed by splitting the main stem above the highest node. Many fields continue to show uneven signs of nutrient deficiency. Some growers are applying additional nitrogen with positive results.

Fungal disease pressure is rapidly increasing with the wet, cool weather we have been experiencing. Much of the disease observed appears to be Septoria leaf spot, but powdery mildew has also been reported. Michigan State University Extension recommends wheat growers with significant leaf or stem disease and high yield potential should consider applying a fungicide. Applications should be timed to protect the flag leaf and flowering head. Growers are tank-mixing fungicide and herbicide in fields where weather delayed weed control measures and early disease pressure is mounting.

Aphids are present in certain areas, but numbers are low. Lady beetle populations are increasing in response. No additional armyworm moths were trapped at our monitoring site in the last six days, limiting the season total to the two caught last week. Armyworm pressure will likely be low this year, but growers should continue to scout their fields.

Alfalfa in northeast Michigan is 11 to 24 inches tall. I have not observed any bud development near Rogers City, Mich., but a local agribusiness professional reported small buds in some stands. The estimated relative feed value of one field sampled was 210. We have accumulated approximately 439 base 41 GDDs at the Hawks Enviro-weather station and are forecast to reach 591 by June 5. Growers in our region will likely begin cutting in the next 10 to 12 days, depending on weather.

Alfalfa weevil pressure is increasing. Fields I scouted are still below threshold in numbers of third and fourth instar larvae with minimal feeding damage. Most growers in our region should be able to avoid an insecticide application by taking their first cutting before weevil populations reach threshold. Potato leafhopper numbers are very low. Recent rains and cool weather have slowed the germination and development of new seedings.

Corn growers in our region have approximately 85 percent of their corn crop planted, and much of it has emerged. The most developed plants have two fully expanded leaves (V2). Minor frost injury occurred in some fields over Memorial Day weekend. Growth of the young plants and development of yet-to-emerge seedlings has been delayed by our cool weather. However, what has emerged is consistent and should recover quickly as temperatures increase. 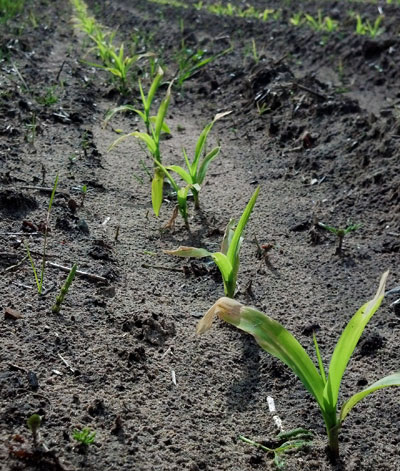 Soybean planting continued through the holiday weekend on high ground and coarse soils. Lower fields are still wet, which will continue to delay planting over the next few days. Soybeans planted 10 to 14 days ago are beginning to emerge. Various bird species are feeding on the tender cotyledons. Emergence has been slower than normal in some areas due to cold temperatures. Growers should scout their fields to check emergence, stand count and weed pressure beginning seven days after planting. For soybean acres yet to be planted, growers should be safe to plant a full-season bean through the first week of June. If the weather delays planting until the second week of June, producers should consider planting a maturity group 0.5 or 1 unit shorter than normal. 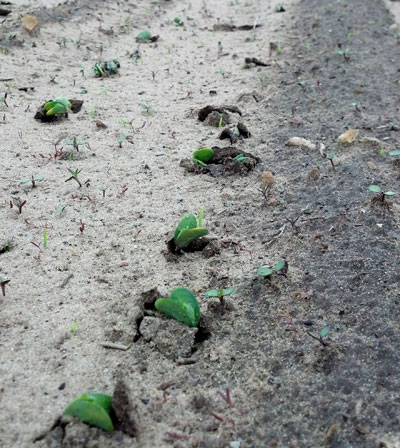 Potato planting is approximately two-thirds complete in the northeast. Growers I spoke with hope to be finished by early next week. Low leafhopper numbers in alfalfa should help the potato crop get off to a good start. 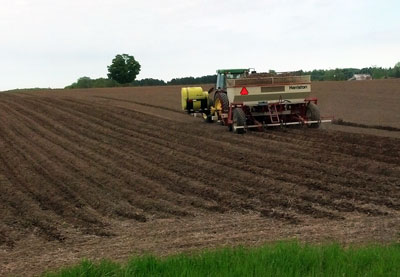