A recent string of dry days has allowed producers to apply fertilizer and begin seedbed preparation on higher ground.

Four dry days between Sunday, May 4, and Wednesday, May 7, paired with slightly warmer temperatures gave producers in our region their first significant opportunity for fieldwork this spring. Although many lower areas remain too wet for tillage, producers have been on the move. A number of fields have received fertilizer or manure and some coarser upland soils have been worked. A few acres of oats were seeded mid-week, and planting will continue as the weather allows.

Northeast Lower Michigan has been the wettest region in our state this spring, according to USDA’s Weekly Weather and Crop Bulletin from May 6, 2014. However, there were only three wet days in the last week with precipitation amounting to 0.60 inches. Those events brought our rainfall total for the last month to 3.49 inches, nearly an inch above the five-year average for this period of 2.66 inches.

The short-term forecast includes significant changes for precipitation this week through Friday, May 9, and nearly every day during the coming work week May 12-17. Yet, the 6-10 and 8-14 day outlooks from NOAA indicate that Northeast Michigan will experience near normal precipitation in the next few weeks.

High air temperatures over the last week have ranged from 47 to 60 degrees Fahrenheit with nighttime lows between 29 and 41. Monday, May 5, through Thursday, May 8, was the first period of four consecutive days with high temperatures above 50 F in 2014. GDDs have accumulated at a slightly faster pace with this increase in temperature, but the Northeast remains two or more calendar weeks behind our average spring. GDD accumulations since March 1 total 377 base 32; 155 base 41; and 19.8 base 50.

Cool temperatures have also prevented producers from applying herbicides for field preparation, as many of these products require a certain minimum temperature to activate. We can expect high temperatures in the upper 50s early next week, tapering-off throughout the following seven days to reach 50 F by Friday, May 16. The medium range outlooks from NOAA suggest that temperatures will continue to be well-below normal in coming weeks.

Winter wheat has greened up in response to slightly warmer weather. Most stands range in development from Feekes stage 3 to stage 4, with later planted fields following soybeans clearly lagging behind (see photo below). Nitrogen fertilizer is being applied as fields dry, with approximately 50 percent of early-season applications completed. Some growers have decided to apply all of their nitrogen in one pass rather than splitting applications due to the late start this year. 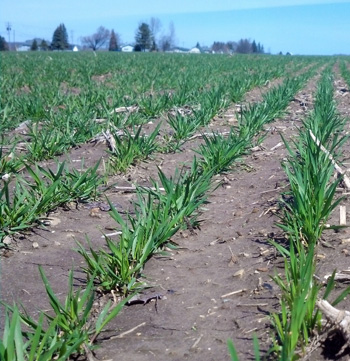 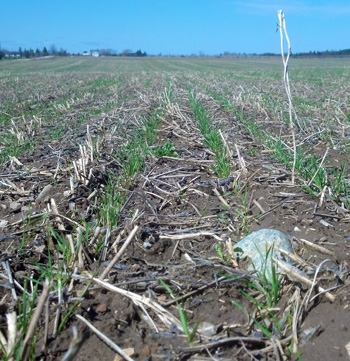 Average soil temperatures are now hovering around 43 F, which is encouraging some new root growth. No true armyworm moths have been trapped at our monitoring site in Presque Isle County and no catches have been reported from the Southern Lower Peninsula, suggesting that the flight has not begun. Our Presque Isle County malting barley variety trial was planted Wednesday, May 7.

Alfalfa is beginning to accelerate growth. Many plants have four or five trifoliate leaves. First cutting will likely be delayed this year due to cool spring conditions. Michigan State University Extension recommends beginning harvest of dairy quality alfalfa at the mid-bud stage, which normally coincides with the accumulation of 750 GDD base 41. No new seedings have been established this spring, except alfalfa frost-seeded or broadcast into wheat, which is beginning to germinate. Cool season forage grasses are approximately 4-5 inches tall.

Oats have been sown in a few fields over the last week. Some were planted in less than ideal conditions, which may impact emergence and stand establishment.

No corn, potatoes, soybeans or dry beans have been planted in Northeast Michigan. Statewide, 3 percent of our anticipated corn crop is in the ground.