Warmer temperatures in the forecast offer hope for crop maturation before frost.

The last two weeks have brought less than 0.10 inches of rain to northeast Michigan. Crops growing on coarse-textured soils are beginning to show signs of moisture stress. However, high pressure will move out of our area late Saturday, Aug. 24, to make way for hot and humid airflow from the southwest. This shift will create daily chances for showers and thunderstorms beginning Saturday evening and continuing through Tuesday, Aug. 27.

The 6-10 and 8-14 day outlooks from NOAA indicate a high likelihood of above normal precipitation in coming weeks. Long lead forecasts for September and early October suggest that this pattern of wet weather may continue into early autumn.

Temperatures during the first half of August were 6 to 8 degrees Fahrenheit below normal on average. Nighttime low temperatures consistently dropped into the mid-40s for nearly two weeks straight. This cool weather put parts of our region three calendar days to one week behind the 30-year average for GDD accumulation. GDD accumulations since March 1 total 3,740.2 base 32 F, 2,463.0 base 41 and 1,575.5 base 50. However, summer-like conditions have slowly returned over the last seven days, with highs breaking into the low 90s Tuesday, Aug. 20, and Wednesday, Aug. 21.

A shift in the jet stream will keep temperatures in the low 70s this Friday, Aug. 23. After that, heat and humidity will again build to reach the mid-80s by Monday, Aug. 26. The 6-10 and 8-14 day outlooks from NOAA suggest that our region will likely experience above normal temperatures in the next few weeks. This is a welcome prediction for growers who are looking to make-up for late planting or GDDs lost to our cooler than normal summer.

Winter wheat harvest is finally complete in the northeast. Due to pre-harvest sprouting, much of the crop produced in our region is being stored on-farm while growers search for favorable feed grade markets. A few operators are baling straw. Most are preparing the ground for their next crop, spreading lime and tilling-in the wheat stubble. Seeding of fall cover crops like oats and cereal rye will soon follow on some fields.

Late second cutting alfalfa and timely third cutting operations are largely complete. Our recent streak of warm, dry weather provided nearly ideal conditions for the curing of dry hay early this week. Adequate precipitation and moderate temperatures throughout much of this growing season have allowed alfalfa and cool season forage grasses to yield particularly well. In fact, forage yields may prove to be the highlight of the 2013 growing season, and have certainly eased supply and price tensions created by last year’s drought. Most oat nurse crops have been harvested from new alfalfa stands for grain or livestock feed.

Pollination is complete in most northeast Michigan corn fields, but there is a great deal of variability in maturity of the crop. Some stands have barely reached the blister stage while others are advancing into the late milk and early dough stages of grain ripening (R2-R4). The most mature plants are beginning to develop strong yellow coloration in the grain. Growers are concerned that later plantings and full season varieties may not mature before we get a hard frost. If this occurs, a significant portion of crop may be chopped for silage. However, with long-term forecasts indicating a good chance for above normal temperatures through September, more grain may mature than anticipated. Interestingly, ideal conditions during pollination caused many plants to produce more than one cob. As a result, producers will certainly be blessed with tons of material to harvest, hopefully it is dry grain. 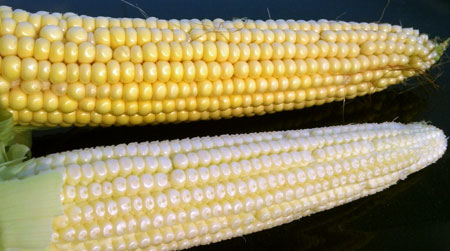 Soybeans in our region also vary widely in maturity from late bloom to beginning seed (R2-R5). As with corn, growers are concerned that later soybeans may not mature before frost hits. Frost-damaged soybeans dry slowly and can be difficult to thresh. Soybeans that fail to reach the R6 growth stage (full seed) prior to a killing frost can be harvested for forage, but the market value of this product is considerably less than soybean grain.

Soybean aphid numbers have increased slightly with recent warm, dry weather and new flights from Wisconsin and Minnesota. The economic threshold for soybean aphid is 250 individuals per plant. Most fields remain well below threshold. Downy mildew and Cercospora leaf blight pressure has also picked up in some areas, but very little white mold has been reported.

Potato growers in our region are a couple of weeks out from desiccant applications. Harvest should begin in mid- to late September. Cool temperatures and sufficient rainfall resulted in an excellent year for potato production, and growers are expecting a bumper crop. In Presque Isle County, 1,500 to 2,000 acres are dedicated to potato production. Growers will harvest approximately 34,500 pounds per acre, most of which will go to the fresh table stock or certified seed markets.

Dry beans have mostly finished bloom and pod set. Their photosynthetic energy will now be directed to filling and maturation of the seed (R4-R5). Kidney beans are beginning to show some red color in their developing seed coat. A few fields are showing interveinal chlorosis of the newest leaves, indicating possible zinc deficiency.

Western bean cutworm flight is largely complete. Moth catches never reached threshold and have declined significantly over the last two weeks. Damage from larvae feeding is expected to be negligible. 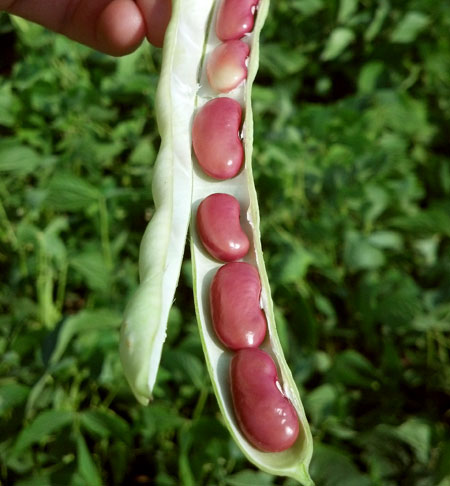 Kidney beans are beginning to develop the red seed coat that
they are known for. Photo Credit: James DeDecker, MSU Extension