Several crops are entering the reproductive stages of development, which are critical for yield.

Last week brought both unusually warm weather and much needed precipitation to northeast Michigan. Approximately 0.62 inches of rain fell Thursday (July 18), followed by another 0.53 inches on Friday (July 19). These showers temporarily improved soil moisture conditions, but more rain will be required as several crops begin the reproductive stages of their development. Luckily, the next few days will include significant chances for precipitation as a cold front moves through our region.

Unseasonably cool temperatures paired with relatively high water temperatures in Lake Huron may also create the potential for lake effect clouds and showers. Rainfall totals over the next few days could be 0.5 to 1 inch across the region. The 6-10 and 8-14 day outlooks from NOAA suggest a good chance for above normal precipitation in coming weeks.

An upper air trough is expected to form over the Great Lakes in the next couple of days and funnel cool air from Canada into our region. This will mean cooler high temperatures in the mid-60s to lower 70s for the remainder of July. Temperatures are expected to rebound somewhat early next week with highs in the low 80s. The 6-10 and 8-14 day outlooks from NOAA indicate that our region will experience near to slightly below normal temperatures in coming weeks.

Ripening of winter wheat in northeast Michigan was accelerated by the unusually warm weather last week. The grain continued to dry and harden quite evenly over the last seven days despite somewhat cooler temperatures and the rain we received last Friday (July 19).

It appears that our region was able to avoid the late scab infections and related vomitoxin concerns that have plagued growers down-state this harvest season, particularly in Michigan’s Thumb. A few combines have already made it to the field to begin harvest, but the majority of wheat producers in Presque Isle County anticipate beginning harvest early next week. Yields are expected to be slightly less than optimal due our cool, wet spring and resulting nutrient management issues. However, if vomitoxin concentrations are indeed low, this could create a market advantage for growers in our area. Many fields are showing signs of sooty head molds, but it is yet to be determined if this normally inconsequential disease will have any significant impact on grain quality.

Some alfalfa growers are beginning to harvest second cutting alfalfa. Plants are 10 to 28 inches tall and many are beginning to flower. Neutral detergent fiber (NDF) concentrations are approximately 39 percent. White sweetclover is blooming in pastures and ditches. Livestock producers are reminded that, while sweetclover can be used as forage, it is best to allow livestock to graze the plants rather than trying to preserve sweetclover as stored forage. Sweetclover contains coumarin, which can cause hemorrhaging in livestock when converted to dicoumarol by common storage fungi.

Corn in our region ranges in development from the seven-leaf to tassel stage (V7-VT), though much of the crop is just beginning to push out tassels. Once the tassel is fully exposed, silk emergence usually begins in two to three days. Drought stress was very apparent in fields with coarse-textured soils early last week, but the 1.15 inches of rain we received on Thursday and Friday (July 18-19) temporarily improved soil moisture conditions. Hopefully, mild temperatures and regular rainfall will continue as the plants move through pollination.

Although our region has received relatively little rain this month, some growers may be considering foliar fungicide applications to protect corn from diseases like grey leaf spot and northern corn leaf blight. Several factors including hybrid susceptibility, field disease history, crop rotation, plant date and irrigation frequency should be considered when making the decision to apply fungicides. Susceptible hybrids that were planted late in irrigated fields with a history of fungal disease may benefit from a fungicide application. 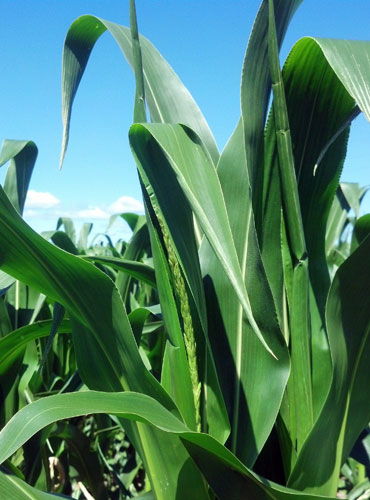 Soybeans in the northeast have five to nine fully emerged trifoliate leaves and most stands are flowering. Flowering ranges from just a few open flowers at the lowest nodes to full bloom (R1-R2). Weed escapes, particularly lambsquarter and ragweed, are becoming a concern. Some weeds have survived two herbicide applications using multiple modes of action. It is yet to be determined if the escapes are due to improper herbicide selection and use or the development of genetic herbicide resistance among certain species.

Michigan State University Extension reminds growers that full flower (R2) is the cutoff point for glyphosate applications in soybeans. However, preharvest weed control options are available. The soybean aphid outbreak that occurred in the Thumb thankfully never made it to our area. Treatments were applied to our on-farm white mold and foliar growth promoter trials earlier this week. Deer feeding continues to be a major issue in some field areas.

Potato hilling is largely complete. The crop in our region appears to be developing nicely. However, for the first time in three years a case of potato late blight was confirmed in Michigan on July 12. Plants from an Allegan County farm tested positive for the US-23 genotype. According to Willie Kirk of MSU, the pathogen favors wet weather with moderate temperatures (60 to 80 F), high humidity and frequent rainfall. While no confirmed cases of late blight have been reported in our region, weather conditions expected over the next week could favor development of the disease.

Dry beans in our region have five to seven trifoliate leaves and are in full flower (R2). The earliest developing pods are 0.25 to 0.5 inches in length. Mexican bean beetle and Japanese beetle damage has been observed in some fields, but appears to be mostly insignificant. A few growers are applying foliar fertilizers to correct symptoms of zinc and iron deficiency. Until this Wednesday (July 24), I had yet to trap a single western bean cutworm moth. One suspect individual turned up yesterday (June 24) in a trap near Moltke, Mich., but I am waiting to hear from MSU Extension’s field crops entomologist Christina DiFonzo regarding its identification. 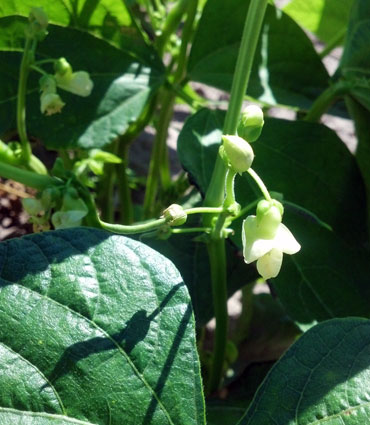