Temperatures have soared into the 80s and 90s this past week, and growers are harvesting high value varieties at this time.

This is the fifth apple maturity report of the 2017 season. The northwest Michigan apple crop is still looking good, and quality still seems to be holding despite this heat this past week. As with most apple growing regions around the state, the recent temperatures across northern Michigan reached into the high 80s and low 90s—Traverse City, Michigan, even broke its long standing record by five degrees on Sept. 22, when the daytime high hit 95 degrees Fahrenheit.

The temperatures have been hard on the fruit and also make harvest difficult for workers. Temperatures are predicted to cool today, Sept. 27, so we will drop from a high of 90 F yesterday to a high of 62 degrees today. McIntosh and Honeycrisp varieties again moved along in maturity this week. Many growers are concentrating on Honeycrisp right now, but McIntosh apples have been harvested this week as well. We harvested Honeycrisp at the Northwest Michigan Horticulture Research Center on Friday, Sept. 22, and again on Sept. 25, and there were noticeable declines in firmness between those three days with this heat.

We continue to observe some water core in Honeycrisp, but incidence was low in the block we tested. We also detected water core in two out of our three Jonagold samples this week. Some growers also reported sunburn in some of their blocks from the past week’s recent heat.

This week’s Gala samples range from 3.4-7.4 in starch index. This variety has matured quickly in this heat, and the Galas at the Northwest Michigan Horticulture Research Center moved from firm to extremely soft in less than five days. Growers are looking to increase their labor pool to move through harvest as fast as possible; some growers are using workers from wine grapes that are available. Growers are wondering how the apples will hold up in storage with this recent heat wave. 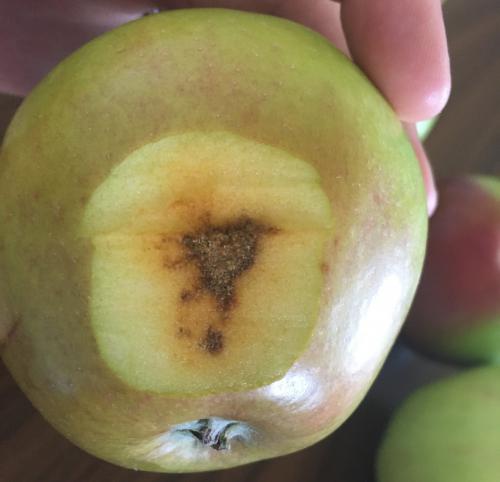 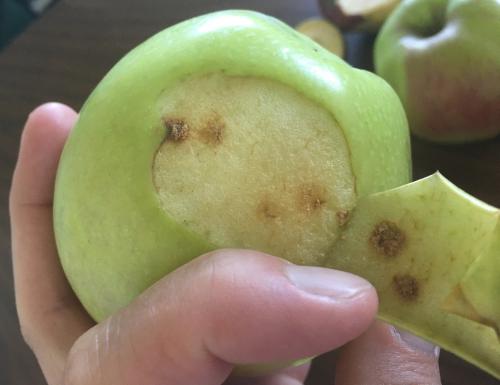 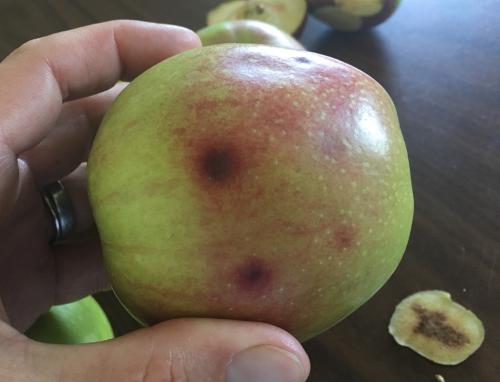 *First sample of the season and maturity results indicate these varieties are not mature at this time.

As anticipated, Gala maturity moved quickly in the last week. Gala apples have maintained firmness despite the 2.3 increase of starch index and an additional one percent increase in brix. The apples are still firm, and the starch index of all four samples is only about 1.5. The Gala blocks we sampled this week are ready to harvest for fresh eating, and Gala at the research center are already over mature. Growers have been challenged with the overlap of harvesting Honeycrisp and Gala this season.

Honeycrisp harvest began last week and because maturity moved rapidly in the recent heat, many growers have shifted harvest crews to Honeycrisp blocks to get these high value apples harvested as soon as possible. Four of our five sampling sites have been harvested at this time and data for the remaining block is reflected in the table this week. This block in northern Leelanau County has reflected the trend of other blocks—a 1.3 jump in starch removal, a decrease in about 1 pound, and a slight increase in brix percentage (data not shown).

We sampled three Jonagold blocks this week and testing results indicate most blocks are mature and ready to be harvested. Starch indices increased by about 1.5 and firmness has decreased; brix percentages are consistent with last week’s results. Water core was apparent in two of the three samples we tested.

We sampled three blocks of Ida Red this week and there has been only a slight change in maturity since last week’s first sample.

*Firmness is measured with a mechanical 11-millimeter wide probe inserted into the pared flesh of a fruit to a distance of 8 millimeters. Starch index is measured on equatorial cross section of an apple stained with iodine solution and rated using the Cornell University starch-iodine index chart for apples on a 1-8 scale (Predicting Harvest Date Window for Apples by Blanpied and Silsbey, Cornell Extension Bulletin 221.)