Fruit crop and pest development have been slow this spring in Northwest Michigan.

Growing degree days (GDD) in Northwest Lower Michigan are continuing to slowly accumulate (see table). At the Northwest Michigan Horticultural Research Center (NWMHRC), we have observed daily minimum temperatures ranging from 28.9-44.1 degrees Fahrenheit and daily maximum temperatures of 44.3-59.4 F in the last week (as of April 29, 2014). These minimum and maximum temperatures are higher compared with the previous week’s observations and there have been fewer hours spent below freezing.

The six-day forecast shows consistently cool, average temperatures in the low to mid-40s up to the low 50s with minimum temperatures potentially just above freezing in the low 30s and maximum temperatures potentially reaching 60 F. Currently, rain is on the forecast for today (April 29) and more showers are possible through the rest of the week. This predicted rain should speed up the melting of the few small piles of snow leftover from larger snow banks and help green up the landscape. Grand Traverse Bay is mostly open water at this time, although some shifting ice remains.

Due to ongoing cool temperatures, progress on fruit trees and vine growth has been very slow this spring. Most apples remain dormant and cherry buds are swelling and beginning to show side green.

Growers in the region have started dormant season applications in sweet cherries targeting bacterial canker and scale, where present. The NWMHRC began monitoring for scale last week and have identified scale in sweet cherry orchards in the region with higher incidence in Leelanau County and on Old Mission.

To address possibilities for saving trees from rodent damage, a bridge grafting workshop was held on the Fruit Ridge last week. Ron Perry from the MSU Department of Horticulture and Robbi VanTimmeren from VanTimmeren Grafting Services in Grand Rapids, Michigan, provided information on collecting and storing scion wood, when to begin and end grafting during the season as well as a hands-on demonstration of bridge grafting. 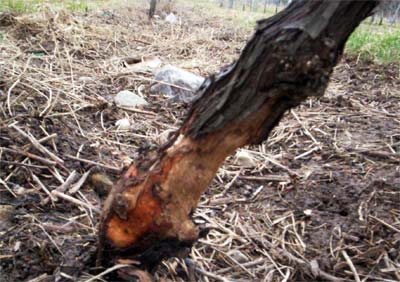 Wine grapes. Chardonnay and Riesling are still very dormant in appearance in Northwest Michigan. With the prediction of continued cool weather, we will not see much happening in vineyards over the next week. Although mouse and rabbit injury is quite widespread and serious in tree fruits, it does not appear to be a significant problem in area vineyards. We received the image to the right of rodent injury to vines from the Northeastern Lower Peninsula.

The Viticulture First Friday Meeting series for 2014 starts this week, May 2, from 3-5 p.m., at the NWMHRC in Leelanau County. We will look at the various levels of bud, cane and trunk injury that resulted from last winter’s sever temperatures, comparing the impacts on common Northwest Michigan varieties and the test varieties in the NE 1020 wine grape cultivar trial. Pruning and training strategies to address winter injury issues will be discussed and demonstrated. Tailgate wine tasting will follow. Early arrivers are welcome; bring your pruning shears and we’ll put you to work!

The meetings are hosted by Parallel 45 Vines and Wines in cooperation with Michigan State University Extension. For more information, contact Duke Elsner at elsner@msu.edu, 213-922-4822 (office) or 231-357-8353 (cell).

Dr. Rothwell’s work is funded in part by MSU’s AgBioResearch.