Wet conditions and continued rainfall present challenges for disease management in all tree fruit crops in the region.

Weather conditions during the last week have been wet. We have reported rainfall at the Northwest Michigan Horticulture Research Center (NWMHRC) seven of the last nine days. The rainfall in the northwest region is less than other fruit growing areas around the state, and these northwest Michigan events total just less than 1.5 inches of rain. However, high humidity and fogs have accompanied these rain events, and long wetting events have been reported at many northwest Michigan Enviro-weather stations. In some areas, fog has been sitting on the tops of orchards for many days in a row – these fogs are likely the cause of the cold lake and warm air temperatures. Again this week, our growing degree day (GDD) accumulations are similar to our 25-year average, and we have accumulated 937 GDD base 42 and 516 base 50.

In grapes, vinifera vines are still looking bad in many sites. There is a lot of rootstock growth on vines which have few scion shoots. Like last year, it will be important to keep as many of the basal shoots as possible on these vines – very few will need to be suckered this year, except for removing the rootstock growth. Hybrid varieties are growing quickly, many are in the 12-inch or longer shoot growth stage. Wild grapes are in full bloom, and bloom of cultivated varieties will soon begin in the Grand Traverse region.

We have not seen any powdery mildew or downy mildew. It will be important to scout carefully for these diseases because of the concentration of shoot and leaf tissue at the base of vinifera vines that we have to put up with this year.

Saskatoon fruits are sizing a bit now and taking on a reddish cast on the sides exposed to the sun. Adult apple curculio numbers and oviposition have declined. Rose chafer adults are moving into plantings now. These can be severe defoliators, so it will be very important to watch out for them and take action if needed. Green fruitworm larvae and pyramidal green fruitworm larvae are more numerous in saskatoons than in previous years. Rust symptoms on berries have increased, but we have not seen much foliar or stem infection from this disease. 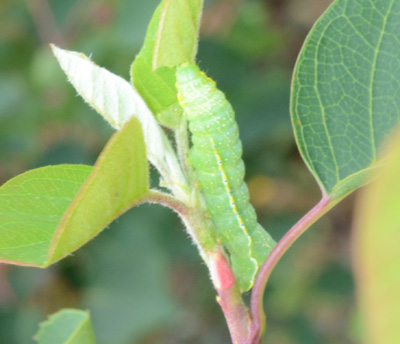 Tree fruit continues to size, and frost scars are evident on many fruits. In some orchards, frost scars are evident on much of the sweet cherry crop, and keeping these cherries free from American brown rot under these wet conditions will be a challenge. Growers are diligently trying to control diseases in all tree fruit crops as conditions have been ideal for fungal disease development. The tart and sweet cherry crop is variable between orchards and within orchards.

Recent warm, wet, foggy and humid conditions have been conducive for disease development and particularly challenging for growers to keep green tissue and developing fruit covered and protected this season. More disease symptoms are starting to appear following what seems like a never-ending wet spell. Many Enviro-weather stations are currently reporting long infection periods of 30 or more hours, with some areas up to 60 or more hours of wet conditions and 160 or more hours in Kewadin, Michigan. Although we have received a good amount of rain, rainfall accumulations are not as high as we would expect from such long infection periods. However, humidity levels have remained high between rain events, and we have seen several foggy days in the last week.

Growers are concerned with cherry leaf spot this season because the weather has been favorable for the development of this disease. In addition, conditions have not been optimal for spraying between rain events. Furthermore, there has been overlap in crop development that has posed challenges with balancing horticultural sprays and pest control in apples and cherries in ideal spraying conditions. There are low levels of cherry leaf spot infections in most orchards at this time, and preventing the spread of cherry leaf spot conidia to adjacent tissue will be critical for preventing high levels of cherry leaf spot development later in the season. Many growers protected for cherry leaf spot late last week and again early this week. Some growers also protected for powdery mildew last week, and previous research at the NWMRHC has shown that the optimal timing for powdery mildew control is at the first cover timing, well before the pathogen’s mycelium are visible on leaves.

Primary apple scab is ongoing and according to Enviro-weather’s apple scab model, 95 percent of spores have discharged at this time. Primary apple scab season has ended in southeast Michigan, but primary has not been called in the west central area at this time; the end of primary in northwest Michigan typically follows one or two weeks after west central Michigan. Michigan State University Extension remind growers that preventing infection during primary is key for minimizing the need for control of secondary scab infection, even in blocks with little or no fruit this season.

Last Thursday, June 10, we observed apple leaves infected with cedar apple rust, a fungal disease that begins on infected red cedar galls that produce telial horns and spores that spread to susceptible apple varieties following warm and wet conditions in the spring. Leaves currently showing lesions would have become infected in the spring, and once infection occurs fungicides will not eradicate the disease. Cedar apple rust-infected leaves will produce spores in mid- to late summer that could infect nearby red cedar trees – if present – and become a source of inoculum next season.

Plum curculio activity is ongoing and keeping fruit protected during recent wet conditions has been challenging. We detected codling moth for the second consecutive week and are setting biofix at the NWMHRC for June 9, the date of the first codling moth caught at the station. Since codling moth biofix, we have accumulated 95 GDD base 50, and we are approaching the optimal timing for codling moth management between 100-250 GDD base 50. We have not detected flight of obliquebanded leafroller adults at this time, but expect these moths will become active soon.

Spotted wing Drosophila traps were deployed in the region two weeks ago, and the first SWD detected in Michigan was found in Benzie County June 11. This SWD was a female fly captured in a Trece lure baited trap that was placed on the interior of a tart cherry orchard, approximately 200 feet from the orchard edge. We would like to remind growers to wait to begin SWD management programs until cherries are susceptible (when they lose their green color) and SWD are detected in nearby orchards or areas.