Growers are assessing sweet cherries, tart cherries and apples for damage from the May 20 frost.

The ups and downs of the 2015 weather continue. For the latter part of last week, our daytime temperatures were up in the high 70s and low 80s. Temperatures dropped Friday evening and into Saturday, May 29-30, and Saturday was cold and rainy. Weather conditions are predicted to be seasonal for the remainder of the week. We have accumulated 652 growing degree days (GDD) base 42 and 341 GDD base 50. We had substantial rainfall throughout the region over Memorial Day weekend, and the Northwest Michigan Horticulture Research Center (NWMHRC) received 2 inches of rain. More rain came Friday night into Saturday, May 30, and we received about 0.36 inches of rain at the NWMHRC.

In grapes, we are now seeing a few signs of recovery from the winter cold and May 20 freeze event. The majority of vinifera vineyards still look miserable, but there are a few sites where there is shoot growth from buds on the fruiting wire in at least part of the vineyard. Some of our severely injured vinifera varieties at the NWMHRC are pushing out a few shoots from buds very low on the vine. Rootstocks are also producing a number of shoots, so it will be necessary to verify where your live shoots are coming from.

Except for a few sites that appear to be OK, the goal for vinifera blocks this year will be like last year – keep as many live shoots as possible, keep them growing upright to keep them out of the way of tractors and machinery and work toward a better year to come. Some of the hybrid varieties are looking better now, with good shoot growth and nice flower clusters showing. Secondary buds have pushed at some nodes where the shoots from primary buds have been killed. We’d like to hear from growers about which hybrids have come through well and which ones were hurt this year (contact Duke Elsner at elsner@msu.edu). At the NWMHRC variety trial, Chambourcin and NY 81.0315.17 are clearly the worst of the hybrids.

Saskatoon fruit development has progressed to the small green berry stage. Poorly pollinated berries are still falling off, but the crop looks good. Insect activity really picked up during the last week. Curculio adults are now laying eggs, producing very characteristically-shaped scars on the fruit. There has also been some foliar and fruit injury from obliquebanded leafroller larvae at some sites. Woolly aphid colonies are curling leaves. We have now seen the first symptoms of rust infection on berries. 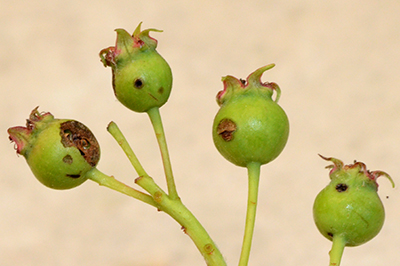 Sweet cherry, tart cherry and apple growers continue to assess damage from the May 20 frost, and unfortunately damage is easy to find throughout the region. At this time, the Benzie-Manistee, Michigan, area seems to be hit a little harder because they were further along than other counties. However, the damage can be found throughout many blocks in all counties in sweet cherries, tart cherries and apples. There is tremendous variability between orchards; some orchards have a good crop while other orchards have no fruit. The current tart cherry estimate for northwest Michigan is between 80-88 million pounds.

The apple crop is also variable, where some growers are reporting a decent set in later varieties while early blooming varieties have more damage. Michigan State University Extension recommends growers wait until fruitlets are 10 millimeters before making thinning decisions. There will be no stress predicted for thinning this week, so once growers have assessed their crop, thinners should be applied at normal rates. Carbohydrate models for Benzonia, Michigan, and the NWMHRC are below and show there is no stress in the coming week. Growers should remember frosted fruits will thin easier. 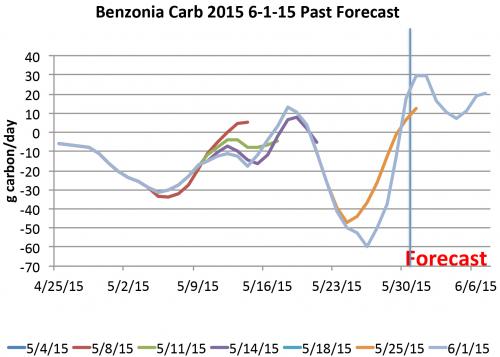 The Carbohydrate Thinning Model for Benzonia, Michigan, as of June 1, 2015. 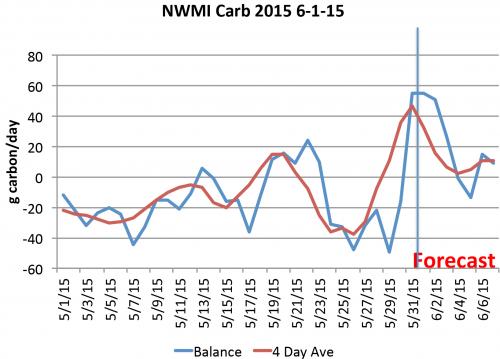 The Carbohydrate Thinning Model for the Northwest Michigan Horticulture Research Center as of June 1, 2015.

Many tart cherries in the region are past shuck-split and we would like to remind growers chlorothalonil use is not permitted post-shuck split. A Special Local Needs 24c label that permits the use of Bravo Weather Stik post-shuck split is available for tart cherries. For additional information on requirements for this 24c label, visit MDARD’s Bravo/Tart Cherry webpage or the Farm Assist website. You can also read the article, “Where can growers find the special 24c label for using Bravo Weather Stik past shuck split?”

Apple scab lesions were visible last week in very low levels. Primary apple scab is ongoing and we have collected very few spores (less than 10) on spore rods, which is consistent with our low catches throughout the season. Due to these low discharges at the monitoring site, we cannot be certain these spore numbers are representative of other apple orchards throughout the region. However, the end of primary is in sight for northwest Michigan.

According to the apple scab model on MSU Enviro-weather, 100 percent of spores are mature at this time and rain in the last week helped move the spore discharge percentage to 81 percent. A few more good rain showers should push the last of the spores to end primary scab. However, there is only a slight chance of rain in the forecast toward the end of the week. Pending rain, growers should continue their primary scab programs to protect developing fruit and leaves from possible infection and prevent the potential for secondary scab infections later this season.

Plum curculio are active throughout the region and stings have been observed on fruit. Although we have not observed codling moth at the NWMHRC, we have received reports of codling moth activity in the region.