Fruit are beginning to size, and northwest Michigan has an excellent crop of sweet and tart cherries. Apples are also setting well.

Weather was warm at the latter part of last week and into Saturday, May 4, but Sunday’s high reached only into the mid-60s. Cool temperatures are predicted with a high in the low 50s today, June 7. Temperatures are supposed to warm slightly tomorrow and reach the high 70s by Friday and Saturday, June 10-11, which are more normal temperatures for this time of year. We have accumulated 801 growing degree-days (GDD) base 42 and 436 GDD base 50.

Rainfall amounts vary dramatically across the northwest region. We calculated the following total rainfall amounts for each of Michigan State University’s northwest Enviro-weather stations for May 1 through June 6:

These numbers are variable, and these differences may impact disease development, particularly apple scab. Calling the end to primary scab may be difficult in areas where there has been little total amounts of rainfall. The next rainfall is predicted for Saturday, June 11.

Fruit is sizing well and all cherries are 11-13 millimeters across all varieties. The cherry crop varies across different orchards in the region, but overall the sweet crop is looking excellent. As mentioned in last week’s FruitNet, we are observing trees of the variety Ulster that are not setting fruit despite a good bloom. Most of these trees are on a variety of rootstocks: MxM60 and Mahaleb and are in the 6-9-year-old range. We are trying to better understand why these healthy trees are not bearing fruit.

The tart cherry crop is also looking very good at this time. In general, younger trees tend to have a larger set than older trees. The estimate for northwest Michigan varies among growers, but the range of total crop has been 125-180 million pounds. The Michigan Guesstimate will take place June 22. The Balaton crop also looks good at this time.

We have great growth on all of our tree fruits. Growers are starting to make their Pro-Gibb applications in tart cherries. The timing for this application is five to seven terminal leaves; however, warm temperatures are needed for a good response from plant growth regulators. As mentioned last week, we had some reports of Pro-Gibb applications that did not work well in last season’s cool temperatures. MSU Extension recommends growers wait until it warms up again before making this application.

Thinning apples has been challenging this season. When we had warm temperatures earlier last week, apples seemed to move from bloom to petal fall very quickly. Many growers that have used “nibble” thinning in the past did not use this technique this season because tree development was so fast this season. Most growers began thinning last week when fruitlet size was already in the 8-10-millimeter range. Thinners will not work well in the current cold temperatures, and some apples may be too big to thin by the time temperatures warm up again this weekend. At the Northwest Michigan Horticulture Research Station, our apples are 12-14 millimeters in size.

According to the carbohydrate model, trees will not be under stress for the next three days. Growers will likely come in on the weekend when temperatures are predicted to warm. So far, thinning results have varied from farm to farm. At the station, we had optimal thinning in the Honeycrisp block, but we have seen Gingergolds and other Honeycrisp orchards with a lot of large fruit. Growers may need to hand-thin a bit this year. 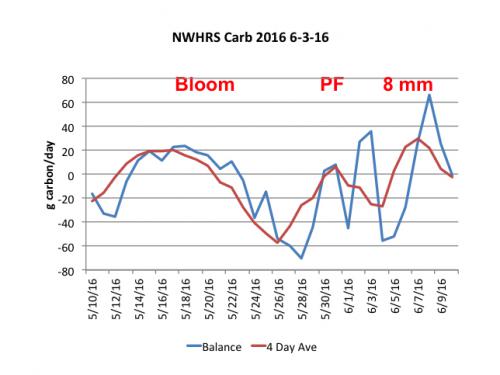 Wine grape shoot growth looks very good in most northwest Michigan vineyards. Vinifera are in the 6-12-inch shoot stage and hybrids are close to 18 inches in some sites. We have seen some cases of poor bud break and survival where severely hail-injured canes were used for this year’s fruiting wood.

No symptoms of powdery mildew have been seen, but we likely had some infection periods during recent rains. A few adult potato leafhoppers have been reported, but overall there has been very little insect pest activity in vineyards so far. We saw a single rose chafer on June 5, so it is time to be scouting to see if we are going to have a significant run of that insect this year.

Saskatoon berries are still in the small green fruit stage at sites visited this week. It appears egglaying activity of all the direct fruit pests has ended. At the small test planting at the Northwest Michigan Horticultural Research Station, we have a high level of injury this year from saskatoon sawfly and apple curculio. There is far more plum curculio activity than in previous years, but these do not compare in importance to the saskatoon sawfly and apple curculio. I have still not seen clear-cut symptoms of entomosporium leafspot, but the first rust symptoms on berries was discovered June 6. Rust will be a serious threat for the next few weeks if we get into periods of rainy weather.

A saskatoon field day has been scheduled for the morning of June 17. Participants will visit saskatoon production sites in Leelanau and Grand Traverse counties. For the full agenda or more information, contact Duke Elsner at elsner@msu.edu.

Rain on the evening of Saturday, June 4, initiated infection periods across the region. Adequate drying time did not occur between the several sporadic rain events over the weekend, and as a result, these infection periods were very long. Overall, there was little rain accumulated for most areas; however, all of the northwest Michigan Enviro-weather stations reported heavy apple scab and high cherry leaf spot infection periods. Reapplication of spray materials may be necessary following recent wet weather, and currently the predicted forecast shows a possible three-day window before the next rain event on June 11.

According to the Northwest Michigan Horticulture Research Station biofix of April 17, 100 percent of scab spores are mature and 92 percent have discharged. Some areas have been drier than at the station, and in dry areas, the primary phase of apple scab could last longer than at the station, as we have received just over 2 inches of rain in May and the early part of June. An afternoon rain on June 2 triggered a high spore release of an average of 87.5 spores. We observed fewer discharged spores following evening rain events over the weekend (see table). We suggest growers use full covers to achieve adequate coverage as we have had substantial growth with the recent heat and canopies are full.

Most orchards are past the timing for chlorothalonil use targeting cherry leaf spot unless applications are made under the special label for post-shuck split applications of Bravo WeatherStik; growers should check with processors before making post-shuck split applications. Many growers have made or will apply first cover sprays for cherry leaf spot and powdery mildew. The recent wet weather was conducive for leaf spot and powdery mildew infections.

Unlike leaf spot, mildew spores do not require free moisture to germinate, and warm, humid conditions are optimal for mycelia growth on leaves. Temperatures are predicted to cool down briefly, and we recommend copper use under these cooler conditions, but growers should remember that neither copper nor Syllit are effective against powdery mildew. If these products are used against leaf spot, a fungicide targeting powdery mildew needs to be included in the tank. Cooler temperatures will slow disease development, but growers should consider including an efficacious material for powdery mildew, as we have no materials that will eradicate mildew once mycelia are visible. Captan alone will not provide activity against mildew; however, Captan demonstrated excellent efficacy for leaf spot in 2015 research trials and the 2015 season was optimal for cherry leaf spot infection.

Most orchards remain free of disease symptoms at this time. The first symptoms of cherry leaf spot started showing up last week, and we have received reports of isolated leaf spot lesions on tart cherries in the region; overall infections are low. Many orchards have the potential for a large cherry crop and preventing leaf spot infection and defoliation will be critical for ripening cherries this season.