Fruit are sizing and recent stormy weather has been a concern for disease management.

Summer weather has hit northern Michigan. Daytime temperatures rose into the high 70s and low 80s degrees Fahrenheit over the last week. These warm temperatures will likely increase the rate of fruit development and insect activity will also respond to these conditions. If the warm weather continues with moisture, disease development will also move along more quickly than when it was cool. Warm weather is predicted to continue throughout the week.

We have accumulated 901 growing degree-days (GGD) base 42 and 478 GDD base 50. Again, these numbers remain similar to our long-term averages. We had high winds on Saturday, and on Sunday, intense early morning thunderstorms were accompanied by more windy conditions. The Michigan State University Enviroweather station at the Northwest Michigan Horticulture Research Station recorded just less than 1 inch of rain on 12 June. The radar showed parts of Leelanau County with a red cell over the county, and more rainfall was recorded in different parts of northwest Michigan. We had some reports of hail during this last storm, but no damage from the hail has been reported. Storms passed through the region again on 12 June and .17 inch of rain accumulated.

Fruits are sizing across the board and the warm weather will speed up development. Sweet cherries at the NWMHRC are around 13 millimeters, which is large enough to start our spotted wing Drosophila (SWD) testing. We are trying to determine the precise time when the fruit becomes susceptible to SWD oviposition. We hope this information will be helpful in determining when to begin SWD management in our different crops. Apples are also sizing, and most varieties at the NWMHRC are past the thinning window at this time. For growers that are still in the thinning window, the carbohydrate model shows that we are in a time of mild stress, and Monday’s forecast suggests decreasing the thinning rate by 15 percent. By Tuesday, standard thinning rates should be used (Figure 1). 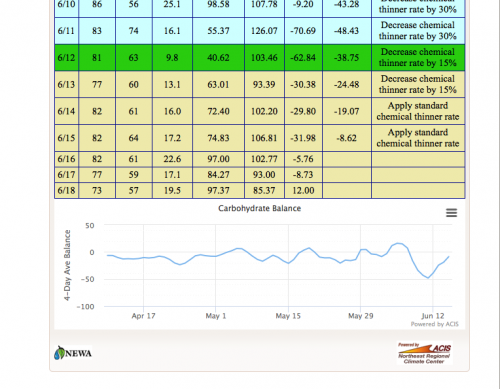 Many growers have had some concerns about Ulster trees that are not bearing even though they are of bearing age. We have tried to find commonality among farms with this issue, but similarities have been limited and the cause remains a mystery. Originally we hypothesized that the trees came from the same nursery but, upon further examination, we discovered that the trees were purchased from six different nurseries. The trees are also on a variety of different rootstocks: Mahaleb, Gisela 5, M x M60, M x M2, Mazzard and Gisela 6. Most of the incidents of the non-bearing Ulsters are located in northern Michigan but there are Ulster trees on the Ridge that are not bearing and have a similar situation to our trees up north. The only common factor is the age of the trees, which are all six to 10 years old.

To further investigate possible causes of these Ulster orchards that are not bearing fruit, we sent in six samples to Washington State University to test for viruses. They used enzyme-linked immunosorbent assay (ELISA) to test for cherry leaf role virus, prunus necrotic ringspot virus and prune dwarf virus. All of the samples came back negative for all three viruses. At this time, we still have no further evidence of what is causing this problem. We will continue to work toward identifying cause or causes. We also would appreciate to hear from growers that have Ulster trees that are just coming into bearing to observe whether younger aged trees also have this non-bearing issue. Please call the NWMRHC if your farm has Ulster trees that are just coming into bearing this season.

Recent windy weather and storms were ideal conditions for possible trauma blight infections. Many growers made streptomycin applications and many were tank mixed with oxytetracycline products (particularly in orchards with streptomycin resistance) to prevent possible fire blight infections following these conditions. The streptomycin component of this tank mix will kill fire blight bacteria and provide limited systemic control of fire blight if tissues were infected. The oxytetracycline component of this mix will inhibit the growth of bacterial populations thereby lessening the risk of severe infections during these recent hot temperatures. As mentioned in previous reports, we are working with George Sundin’s lab to monitor for streptomycin resistance, and we ask growers/consultants to contact the NWMHRC if fire blight infected shoots and ooze are present. We will collect samples and test the isolates for resistance.

With the exception of early morning and night rains on June 12 across the region, the last week has been mostly dry with just one infection period reported for the NWMHRC. However, rain has been variable across the northwest with some areas receiving a minimal amount of precipitation late last week. For example, Bear Lake and Eastport had wetting events that resulted in low apple scab and cherry leaf spot infections on June 8-9, according to MSU Enviroweather. All weather stations in the region are currently reporting cherry leaf spot infections following last night’s rains on June 12.

Although recent conditions have been dry, cherry leaf spot has gotten a foothold in some orchards and disease symptoms have progressed. We have received reports of orchards with sheet-like leaf spot lesions that cover nearly the entire leaf. As mentioned in last week’s report, these orchards could have become infected during the long wetting period May 22-25.

Additionally, early season weather was generally cool and relatively dry with a few occasions that may have triggered leaf spot infections depending on localized weather even though Enviroweather stations did not record ‘official’ infection periods. The relatively cool and dry conditions may have caused growers to relax their leaf spot management programs, especially early when only bract leaves were showing. This scenario may have resulted in the current higher than anticipated leaf spot infections in orchards at this time. Many orchards are past first cover timing when succinate dehydrogenase inhibitor (SDHI) fungicides are suggested for leaf spot and powdery mildew, but if an SDHI was used in an orchard with existing leaf spot a fungicide in this class should be very efficacious against leaf spot. Most growers are considering fungicide options for second and third cover timings and we encourage them to read the article, “Cherry leaf spot management at second and third cover timings” for additional information.

Apple scab spore rods were collected and observed on June 12. There were a total of two suspected scab spores on the rods but positive identification was difficult as the rods were covered with pollen, microorganisms and dirt following the thunderstorm. The most recent spore count on the Fruit Ridge was zero and our colleague MSU Extension educator Amy Irish-Brown has reported that one more rain event will confirm whether or not primary is over on the Ridge. Similarly, primary apple scab is also ongoing in the Hart area. For the NW region, the apple scab model is reporting about 100 percent spore maturity with discharge percentages in the upper 90s. We are continuing to receive reports of low scab infections in orchards. Orchards with existing infections will need to keep fruit covered to prevent secondary scab infection on fruit. Finally, if orchards in the Bear Lake and Eastport areas became infected during the brief wet weather late last week, scab lesions should appear later this week. Overall, many orchards appear to be free of scab at this time.

Codling moth activity is ongoing at the NWMHRC with a slight increase in trap numbers (Table 1). Based on the NWMRHC biofix of May 31, we have accumulated about 200 GDD base 50 and egg hatch will likely begin later this week if temperatures continue to be as warm as predicted. At this time, one of the station’s codling moth traps in our high-density apples has accumulated more than five moths per one trap, meaning that treatment is warranted in that block.

San Jose scale male flight declined this week with only one male on a sticky card (Table 1). These trap numbers suggest that last week was the peak of first generation male flight. We will continue to visually monitor for crawlers on infested trees at the station.

Spotted wing Drosophila have been detected in non-crop hosts as well as in a tart cherry orchard in northern Leelanau County. Please see the SWD table published in this week’s FruitNet newsletter for more information. Green cherries are not susceptible to SWD, so no management tactics are recommended for SWD control at this time. Plum curculio egg laying is ongoing and growers are continuing management programs for this pest. Fruit are still green in many areas, but we encourage growers to consider their SWD-PC management strategy when fruit begin ripening and turning straw-colored. Previous data have shown that SWD can infest straw-colored fruit and these observations were confirmed with international colleagues that are also battling SWD in cherries. Cherry fruit fly have not been detected at this time.