Spotted wing drosophila (SWD) populations typically increase, often exponentially, through the growing season. However, in 2017 we measured a sharp decline of SWD adults trapped at vineyard borders in all regions where we had SWD traps at vineyard sites. SWD population declines were particularly notable in vineyards near north central Old Mission Peninsula from Aug. 31 through Sept. 6 (Figs. 1–3).

The cause of this somewhat unusual population decrease is likely a result of the weather where relatively low temperatures (maximum, average and minimum) and increased rainfall were recorded (Fig. 4). We observed a decrease in overall daytime (and nighttime) temperatures, and a relatively rapid decrease in minimum temperatures that fell from 55 degrees Fahrenheit on Aug. 31 to 42 F on Sept. 2 (Fig. 4). The region also had increased rainfall on Sept. 4 (0.7 inch), Sept. 5 (0.2 inch) and Sept. 6 (0.5 inch).

From Sept. 6–14, SWD populations remained low, possibly due, again, to relatively low average and minimum temperatures on Sept. 9 being 52.7 and 38.8 F, respectively. We will continue to monitor for SWD adults and we will be able to document SWD population activity with the recent warm temperatures and dryer conditions during the week of Sept. 14–20.

As part of the northwest Lower Michigan wine grape report, we will collect berries and measure fruit maturity factors including 100 berry weight, degrees brix, pH and titratable acidity of juice. However, for this report, we were only able to measure 100-berry weight and juice degrees brix from berries sampled from multiple cultivars located in the south Old Mission Peninsula region on Sept. 18 (see table).

As expected, Cayuga White (hybrid) has the heaviest 100-berry weight at 264 grams with a 17.1 brix (see table). Of the Vitis vinifera cultivars at the 2,049 growing degree-day (GDD) mark, Merlot has the heaviest 100-berry weight at 166 grams followed by Cabernet franc at 154 grams, Riesling at 124 grams and Chardonnay at 119 grams. Although having the lightest berry weight, Chardonnay has separated itself from the other V. vinifera cultivars with the highest brix of 19.0 followed by Merlot at 15.1, Riesling at 14.5 and Cabernet franc at 14.2 (see table). 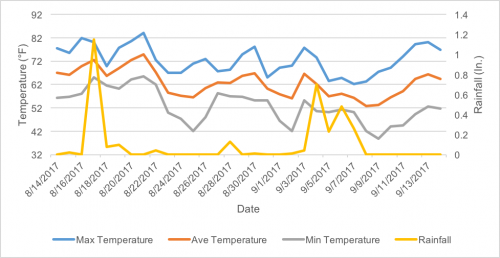