Careful management of lime and fertilizer applications has always been an important component of profitable soybean production, however it becomes essential when commodity prices are low.

Soybean yields and net income can be reduced when essential nutrients are not available at the time or in the quantities required by the crop. However, net income is also reduced when applied nutrients fail to produce yield increases large enough to offset their costs. The following nutrient management recommendations by Michigan State University Extension will help you maximize your soybean income.

While soybeans can tolerate a wide range of soil pH levels (6.0 to 7.0), the ideal pH for soybean production is between 6.3 and 6.5 to maximize biological nitrogen fixation and nutrient availability. Soil pH levels above 6.5 have been shown to reduce manganese availability and increase soybean cyst nematode populations.

Starter fertilizers (2x2 and in-furrow) have produced mixed results in SMaRT (Soybean Management and Research Technology) on-farm trials. In-furrow fertilizer increased soybean yields in two of 11 trials and decreased yields at one location. Starter fertilizer placed in a 2x2 band increased soybean yields in five of 18 trials and decreased yields at two of the sites. The potential for a positive yield response from starter fertilizer increases when phosphorus and potassium soil test levels are below the critical levels for these nutrients and cool or dry soil conditions occur after planting.

Biological nitrogen (N) fixation conducted by well-nodulated soybeans combined with nitrogen mineralized from soil organic matter provides sufficient nitrogen for optimum soybean production in most cases. Therefore, nitrogen fertilizer applications to soybeans are rarely profitable and are not recommended. Research results from five SMaRT trials support this. Three trials conducted in 2011 and 2012 showed that late-season nitrogen applications did not increase soybean yields on irrigated, coarse-textured soils. One trial conducted in 2016 demonstrated that 100 pounds per acre of nitrogen as anhydrous ammonia reduced yields by 2.5 bushels per acre and 40 pounds per acre of nitrogen did not increase yields. In another trial conducted in 2016, 6 gallons per acre of 28% UAN banded 2 inches beside the row at planting failed to increase soybean yields.

Maintenance levels of potassium fertilizer should be applied to keep the potassium soil test level above the critical level. Soybeans remove 1.4 pounds of K2O per bushel per acre. Therefore, the maintenance application rate for a 60 bushel per acre soybean crop is 84 pounds of actual K2O or 140 pounds of 0-0-60 per acre. The maintenance application can be applied biannually in corn-soybean rotations produced on mineral soils under the following conditions: the fertilizer is applied prior to planting corn; the application rate accounts for the potassium removed by both crops; and the CEC is 6 meq per 100 grams or higher. When applying potassium fertilizer prior to planting soybeans, spring applications (two weeks prior to planting) are recommended over fall applications on coarse-textured soils having CECs less than 6 meq per 100 grams or organic soils to avoid leaching losses. 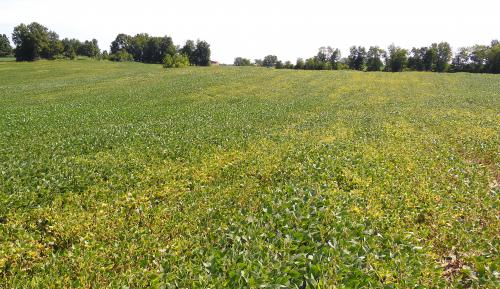 Soybeans are classified as having a low probability of responding to applied boron even on soils having low soil test levels. Despite the low probability of a response, university research trials conducted in other states have shown modest yield responses to applied boron in the absence of deficiency symptoms. However, we have not shown a yield response to applied boron fertilizer in SMaRT on-farm trials conducted in Michigan. Foliar boron applied at R1 was evaluated in six trials and granular boron applied prior to planting was evaluated in four trials. Boron is most likely to be deficient in coarse-textured soils, organic soils and lake bed soils having high pH levels.

Manganese (Mn) deficiency is the most common nutrient deficiency seen in Michigan soybeans. Deficiency symptoms are likely on muck or dark-colored sands with pH levels above 5.8 and lakebed or out wash soils having pH levels above 6.5. Because increasing the available manganese levels in the soil is difficult, deficiency symptoms will reoccur in the same areas each year soybeans are grown. Broadcast applications are not recommended due to high soil fixation. Band application of chelated manganese is not recommended either due to high fertilizer costs. Foliar application of manganese sulfate at 1 to 2 pounds per acre of actual manganese is the most economical and effective method for correcting manganese deficiency. Apply 1 pound per acre of actual manganese when the first deficiency symptoms appear (6-inch tall plants) and apply another 1 to 2 pounds per acre in 10 days if deficiency symptoms reappear. Manganese sulfate should not be tank-mixed with glyphosate and the two products should be applied at least three days apart.

A SMaRT trial conducted at two locations in 2013 showed that manganese sulfate monohydrate fertilizer increased soybean yields by 1.9 bushels per acre over an EDTA chelate manganese fertilizer at highly responsive sites. Another SMaRT on-farm research trial conducted at two potentially responsive sites (lakebed soils with a pH of 7.4) in 2013 confirmed that manganese foliar fertilizer applications in the absence of visible deficiency symptoms will not increase soybean yields.

Soybeans are highly responsive to iron, but visual deficiency symptoms are rarely seen in Michigan. Iron deficiency chlorosis is most likely to occur on calcareous lake bed soils having soil pH levels greater than 7.4. Consider selecting varieties that are tolerant of iron deficiency when growing soybeans on these soils. Additional research is required to determine if iron fertilizer applications or the use of iron deficiency chlorosis-tolerant varieties is beneficial in the absence of visual deficiency symptoms when soybeans are grown on calcareous lakebed soils.

Maintaining critical phosphorus and potassium soil test levels, managing soil pH in the optimum range and identifying and correcting manganese deficiency early are the keys to fertilizing soybeans in Michigan.

This article was produced by the SMaRT project (Soybean Management and Research Technology). The SMaRT project was developed to help Michigan producers increase soybean yields and farm profitability. SMaRT is a partnership between MSU Extension and the Michigan Soybean Checkoff program.

Soybean producers should be patient yet prudent about the wet weather