Odd and unusual growths on trees and shrubs

That abnormal lump on your tree or shrub could be black knot, cedar-apple rust or Cooley spruce gall.

As people are strolling around examining their landscape plants this late spring, many have stopped short and gasped at what is on their tree or shrub. What is that peculiar growth that has no business being there? Michigan State University Extension takes a look at several of the usual suspects.

If you have decorative plum trees with names like purple leaf plum, sand cherry or edible plums, they can develop a problem called black knot. Edible plums like Stanley and Shropshire are very susceptible and others are moderately susceptible. Wild plums like Canada or American also can fall victim. Occasionally, this is found on cherries.

Black, corky, bulging galls are found on small branches. The gall often deforms the branch and causes it to elbow or bend in the vicinity of gall. Eventually, the branch dies because the flow of nutrients is cut off at the gall. During the first year, growths on the twigs are tan, smooth and velvety and difficult to spot. During the second year, the galls turn black and corky. This is a chronic problem on plums.

Do not prune during the growing season. Galls should be pruned out during the winter. Galls on the main trunk cannot be removed without doing a great deal of damage. Fungicides are rarely effective to prevent black knot. The galls cannot be cured, just cut out.

With the first warm rains of spring, little deformed, woody galls on Eastern red cedar twigs sprout orange, slimy projections that make them appear to look like an orange octopus or a big, wilted asterisk. Just as the name implies, it is a disease that needs two partners to happen: Eastern red cedars and apples or crabapples. On cedars, a small woody gall remains all year. It could be the size of a small marble to occasionally as big as a golf ball. It is never perfectly round, but is misshapen.

With the warm rains, orange, slimy projections called telial horns grow out of the gall. For Eastern red cedars, the galls do not seem to create much of a health concern. On apples and crabapples, their problems appear later in the season. The leaves will display bright yellow, orange and red spots on the leaves. When the leaf is flipped up to expose the back, little tentacles or protuberances hang down from the spot. If the apples or crabapples become partially defoliated because of cedar-apple rust, consider using an appropriate fungicide. However, this may never become a problem. 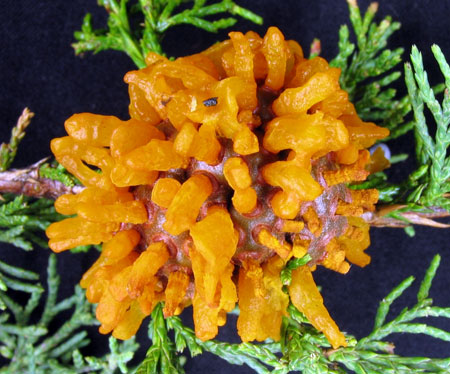 These galls are caused by tiny, aphid-like insects called adelgids. This is a gall that is only found on blue spruces. At the end of the twigs, a swollen bulge appears and grows. To some people it resembles a pineapple. Others mistake it for a green spruce cone. It is actually caused by the small adelgid laying eggs at the base of the bud at the end of the branch. The immature adelgids feed on the tissue in that area and a gall made by the blue spruce forms around them. Galls begin green and age to a rosy color. By mid- to late summer, lemon-shaped holes appear in the galls and the new adelgids run off to hide other places on the tree.

If the galls are brown and have holes in them in the fall, you can prune off the gall, but it will not control the population. Prune green, closed galls and destroy them by burning or burying to control the population. Cooley spruce gall can be more severe if there is a Douglas fir in the vicinity. The pest moves between the two trees and the populations are higher. On Douglas fir, the bottoms of needles develop white, cottony galls in the spring and needles may become splotch yellow or deformed. If there are Douglas firs in the area, check to see if they are experiencing problems. 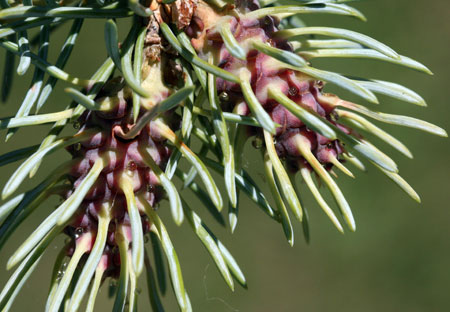 Improve your garden with MSU Enviroweather’s tools and information

Springtime animal damage in your landscape

Identifying critter damage in the garden and landscape