Do your asparagus smell tasty to the pests in your fields? Learn about the odors your crop gives off and how we can use them to improve pest management.

One of the insect pests of asparagus is called the asparagus miner (Fig. 1). It received its name because its young carve out mines in the stem of the plant. The Michigan State University Vegetable Entomology laboratory is working on developing monitoring tools for this insect to help growers determine if they are present in their asparagus fields.

Figure 1. The asparagus miner (A) may be affected by odors, or volatiles, given off by asparagus (B), and we may be able to take advantage of this by using baits (C) to improve pest management.

In order to be able to monitor an insect, we need to figure out a way to attract it to a trap where we can subsequently count its numbers. Traps can attract insects visually or by smelling good to the insect. When we smell food, we are attracted to the dishes we eat. In a similar manner, insects are attracted to the smell of the plants they eat. Like most plants, asparagus gives off a number of smells or odors, also known as volatiles, even when it has not been cut, cooked or digested.

The smell of the plant is not always the same, however. It changes when it is damaged by an insect pest compared to when it is healthy. Damaged plants invite “bodyguards,” or insects that kill other insects such as parasitoids and predators, which locate these plants using the smell of the damaged plant (Fig. 2). The damaged plant’s odor can be pest-specific such that they attract only those bodyguards that will do the most harm to that particular pest. 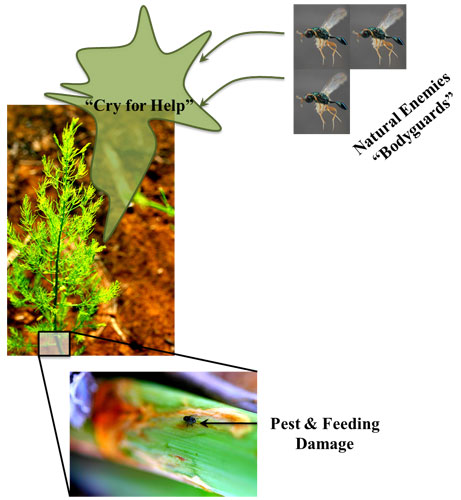 Figure 2. Chemical ecology of asparagus. Feeding damage by the pest causes the plant to release volatiles, or emit a cry for help. This cry for help attracts bodyguards, like parasitoids and predators, which defend the plant against the attacking pest.

However, once these volatiles are released, the plant cannot control who smells them. Certain pests may learn that these volatile cues signify that there is a delicious plant waiting to be feasted upon, and so the volatiles may then attract other pests. In other cases, the damaged plant odor repels other pests because it may communicate that it is dangerous to be in that area due to an increase in the abundance of bodyguards.

If some of the plant odors are highly attractive, Michigan State University Extension instructs they could be employed in a bait that can be attached to a trap to make it attractive to the asparagus miner.  In our work, we identify the components of asparagus smell and test them as baits in the field.