Odor is perhaps the biggest issue facing the Michigan animal industry. The best way to address odor is in a proactive manner.

There are over 160 compounds (odorants) that contribute to manure odor. Concentrations of odorants are small (in the parts per trillion range), but how they interact with each other is poorly understood. Of the five senses, odor is the least understood and the most subjective. Odors trigger memory recollection of events, individuals and locations better than any other sense. Negative experiences with odor are powerful personal motivators for change.

Anaerobic digestion is a biological process that breaks down organic materials (called feedstocks) in the absence of oxygen (anaerobic conditions) into biogas and digestate (see Figure 1). This process is managed in a sealed tank, called a digester. When factors such as temperature and pH are managed in a digester, odors are reduced and nutrients are mineralized. Anaerobic digestion does not reduce manure volume, remove phosphorus or break down inert or lignacious materials. Digestate does not have a manure odor, which increases land application options. Digestate should be land applied based on a nutrient management plan. 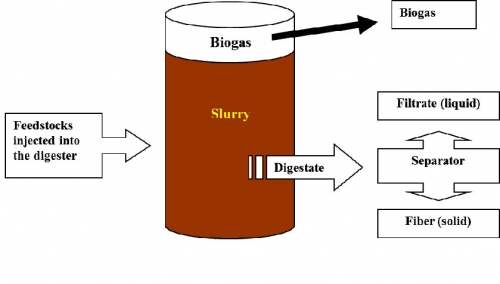 For more information on anaerobic digestion, visit the AgSTAR website or the BIOENERGY Training Center.

By definition, compost is a group of organic residues or a mixture of organic residues and soil that have been piled, moistened and allowed to undergo aerobic biological decomposition resulting in a dark or black carbon-rich relatively stable product (humus). Composting is the controlled, active management of making compost, which includes identifying suitable composting sites, using appropriate amendments to optimize the carbon: nitrogen (C:N) ratio, controlling leachate, determining the length of curing and what constitutes finished compost in addition to keeping records including temperature, turning frequency and final utilization of the compost. When temperature, moisture and C:N are managed under aerobic conditions, odors are reduced, manure is stabilized and nutrients are mineralized. Ammonia release and putrid smells are the most common odor problems when composting. These problems can be addressed by adding carbon and turning the pile.

For more information on composting, visit the Cornell Waste Management Institute website or the Composting Mortality in Michigan website.

Aeration is the process of mixing air (containing oxygen) into liquid manure to promote the growth of aerobic bacteria. An understanding of aeration begins at the microbial level. When oxygen is supplied on a continuous basis, aerobic bacteria convert organic matter to carbon dioxide, water and microbial cells. Little or no odor is found with aerobic breakdown of manure and aeration reduces solids content and manure pit maintenance.

Oxygen must be supplied either naturally or mechanically. Natural aeration occurs in large, shallow lagoons where oxygen can be introduced naturally through wave action to keep the air/liquid interface aerobic. While the entire profile of the pit may not be aerobic, the aerobic conditions near the surface effectively reduce odor emissions. Natural aeration requires a large surface area and shallow depth to be effective. Microbial activity slows down in cold weather.

Mechanical aeration occurs with the aid of aerators that bubble, blow or splash air into manure. The initial cost, ongoing energy cost and maintenance costs of aerators are high. Aerator effectiveness is reduced in cold weather. Nitrogen loss to the atmosphere is increased with mechanical aeration. Generally, mechanical aeration is considered a short-term technique for reducing odor problems. In the long term, farmers are better off choosing other odor control solutions that preserve nutrients and use less energy.

Resources for veteran careers in agriculture

Hiring labor for your farming operation? Use the Agricultural Employer Checklist

New products in the news: Are you reading a sales pitch?