Other insects to be scouting for this spring

Spruce gall midge larvae are hatching in the Lake City area. The newly hatched larvae move to the base of developing needles where they induce the needles to grow around them forming an internal chamber where an individual larva develops. The base of the needles swell as the chamber expands to accommodate the growing larva. This would be the time to treat if you have had problems with this pest. 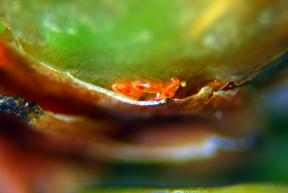 Start watching for the first small green galls to appear on spruce trees infested by Eastern spruce gall adelgid (white spruce, Norway spruce, Black Hills spruce) or Cooley spruce gall adelgid (Colorado blue spruce). If you see new galls forming, clip them off the trees and get rid of them – burning is always a good method. This is obviously not practical if you have a whole field infested or if you have a few huge spruce trees. But, if only a few trees are affected and if the trees are relatively small, this cultural control can keep these adelgid populations from building to damaging levels. 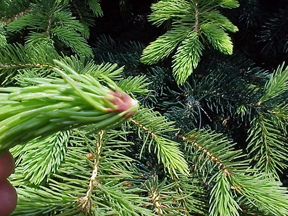 They do not cause galls to form on Douglas fir, but they do cause the needles to become distorted, and at high densities, will reduce needle and shoot growth. Look on the undersides of the needles of last year’s needles for tiny, white cotton balls. The eggs in this cotton ball will hatch soon after buds break in the spring. The new nymphs will move onto the tender, succulent young needles. It often looks like someone has sprinkled black pepper on the new needles. If you need to apply an insecticide, this is a good time to do it. 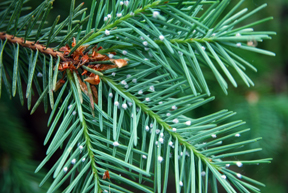