Other pests to be on look out for: Pales weevil and European pine sawfly

Pales weevil is usually more of a problem on choose and cut farms but can also cause damage when Christmas tree fields are harvested nearby. Female weevils are attracted by the odor of fresh pine resin in the spring and lay eggs in the inner bark of new stumps. The larvae feed in tunnels in the larger roots of the stumps - the tunnels may be only a few inches long initially but can extend several feet into the root during the summer. Adults will emerge in late summer to early fall to feed for a short period of time before they move to the litter to over-winter. To control the egg laying adults, remove new stumps by early spring to eliminate the weevils breed material or drench the stumps and surrounding soil with a registered insecticide once between now and mid-May.

The eggs hatch between 100 and 195 DD50. This insect rarely builds to high enough levels to significantly damage the health of trees, but we have seen some pockets in past years with large numbers of sawfly larvae causing sever defoliation. Often growers don’t realize they have a problem until they see the trees turn brown from the larval feeding. Make sure to walk through your fields. Scouting through the windshield you can mistake this browning for Lophodermium needlecast on Scotch pine. If you see these small numbers of these little green larvae on your pine tree, just clip out the colony. Lots of predators and parasitoids like to attack sawfly larvae too. 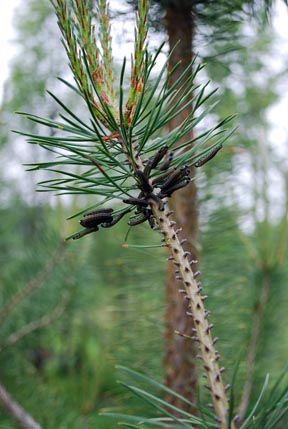