Scout and treat now to preserve your crop.

Many areas of Michigan have received a significant amount of rain that favors the development of Phytophthora disease on winter squash and pumpkin plants. Other vegetables that are susceptible to Phytophthora capsici include cucumber, zucchini, summer squash, watermelon, cantaloupe, pumpkin, pepper, eggplant, tomato and succulent bean. The pathogen may overwinter in the soil and persist for more than 10 years. Phytophthora spreads readily via runoff or infested surface water used for irrigation; using well water for irrigation is strongly recommended.

The roots, crowns, stems, leaves, and fruits of winter squash and pumpkin are susceptible to Phytophthora (Figure 1). On this year’s samples, watersoaked lesions on the petiole (Figure 2A) have resulted from rain splashing infested soil up into the plant canopy. These lesions expand rapidly and the tissue rots. Lesions may appear on the foliage (Figure 2B) during periods of excessive rain and extended periods of high humidity.

Although foliar symptoms are not common in Michigan, leaf lesions and blighting have been observed this year and indicate the wet conditions that some plantings have experienced. Acorn (Figure 1B) and ‘Golden Delicious’ processing squash (Figure 1C) are highly susceptible to root and crown rot; spaghetti and butternut (Figure 1D) squashes and some pumpkin (Figure 1A) cultivars are less susceptible. 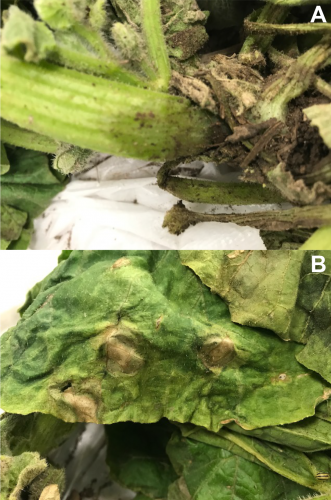 Figure 2. A, watersoaking of the leaf stalk (petiole), and B, leaf lesions on winter squash plants.

Fruit rot symptoms may appear as water-soaked, sunken areas with white mold (spores) that look similar to powdered sugar. Infected fruits rot and become colonized by other secondary bacterial and fungal organisms. It is possible to harvest healthy-appearing fruit, but rot can develop days later while the crop is in transit or on grocers’ shelves. It is risky to harvest fruit from an area of the field where nearby plants have died from Phytophthora as the pathogen may have already infected these fruit although symptoms haven’t yet developed.

Squash and pumpkin cultivar types that become more resistant to rot as the fruits mature include butternut and acorn squash and jack-o-lantern pumpkin. Some cultivars that remain susceptible through fruit maturity include ‘Lumina’ pumpkin, ‘Hubba Hubba’ hubbard squash and ‘Golden Delicious’ processing squash.

If you do not have Phytophthora in your fields, do everything you can to prevent it from occurring. If there is a history of Phytophthora in a field, take preventive measures. Irrigate overhead sparsely; drip irrigation is recommended. If Phytophthora is recognized in the field, remove the infected plants through discing and also include the surrounding healthy-looking border plants. Keep in mind that the pathogen has likely moved beyond the area of dead plants into the healthy plants nearby. Clean all equipment used in the field to prevent spread to other areas. Discard culls in an area where crops are not grown. Plant winter squash and pumpkin into into raised beds, allowing excess water to drain away from the susceptible root and crown area.

Apply fungicides when conditions are favorable for disease development, such as rain; ideally, fungicides should be applied prior to a predicted rainstorm. There are additional registered fungicides that have proven efficacy against Phytophthora and are listed below. Many cultivars produce large, dense canopies and proper application equipment and a significant water volume is usually required to penetrate the canopy.

To protect fruits, it is recommended to apply heavy foliar sprays with drop-leg nozzles at the time of initial fruit formation and again one to two weeks later before fruit reach full size. Rotate fungicides among FRAC groups to prevent the Phytophthora from developing resistance. While mefenoxam (Ridomil Gold, Ultra Flourish) is not labeled for Phytophthora on winter squash and pumpkin, it is labeled for control of Pythium and can be applied by injection through drip irrigation. However, in some areas of Michigan mefenoxam is no longer effective because some Phytophthora isolates have become resistant to it.

The FRAC code is an alphanumeric code assigned by the Fungicide Resistance Action Committee and is based on the mode of action of the active ingredient. When treating for Phytophthora disease, rotate among products with different FRAC codes.

Remember that the pesticide label is the legal document on pesticide use. Read the label and follow all instructions. The use of a pesticide in a manner not consistent with the label can lead to the injury of crops, humans, animals, and the environment, and can also lead to civil or criminal fines and/or condemnation of the crop. Pesticides are good management tools for the control of pests on crops, but only when they are used in a safe, effective and prudent manner according to the label.

Acknowledgments. This material is based upon work that is supported by the National Institute of Food and Agriculture, U.S. Department of Agriculture, under award number 2015-51181-24285.