Phytophthora in asparagus: Know the symptoms

Know the symptoms of Phytophthora on asparagus crowns and fern.

Phytophthora asparagi can infect asparagus crowns in both nursery and production fields. This pathogen can be introduced early in the crown’s life as small infections on the roots (Photo 1). Over a period of growing seasons and under the right weather conditions (frequent, heavy rainfall or irrigation), these early infections can spread to healthy parts of the crown causing more tissue to die (Photo 2). Since the infection spreads within the crown after planting (when the crown is no longer visible), making proper diagnosis of the problem is difficult. The deterioration of the crowns can occur unnoticed over several years. Growers may attribute the overall field decline to other factors and not recognize the true reason for poor yields and fern growth.

Both cultural and chemical controls have limitations in controlling this pathogen and have been mostly ineffective. Some production fields may have a substantial amount of Phytophthora already in the soil. This fact coupled with the long growth cycle of asparagus limits the effectiveness of crop rotation as a disease management tool. Research into tolerant cultivars has been limited and no commercial lines are currently available for planting that show a high level of Phytophthora resistance. The practice of planting crowns deep into the soil limits the ability to apply chemical or biological control products where they could be most effective. Other factors that can limit the length of productivity of commercial asparagus fields include drought stress, low pH that favors Fusarium which is another serious pathogen, defoliation of the fern by purple spot and rust, and overuse of herbicides that stress the crown.

Years ago, a new system of asparagus production was proposed to ensure that newly established fields remain viable and productive and to increase the return on the initial investment. This new system relies on clean and healthy crowns. While research and experience have shown that fumigation with metam potassium (e.g., Sectagon) can reduce levels of soilborne pathogens, it will not completely eliminate them. Additional measures for crown disease management are also needed to compliment fumigation, round out our toolbox and help lengthen field productivity. Recent research efforts have tested applications of soil-applied fungicides to asparagus seedlings in the seedbed nursery. However, fungicides that would be effective against Phytophthora on asparagus are not currently labeled for use in an asparagus seedbed nursery. Also, there are no fungicides registered for use as asparagus crown soaks that work against Phytophthora. The main product that is currently used, Cannonball WP, has activity against Fusarium but not Phytophthora.

Even with the best fumigation application, pathogen levels may be reduced but not eradicated, resulting in some diseased crowns. Whenever possible, inspect the crowns prior to planting in the production field to determine whether Phytophthora is a problem. Symptoms of Phytophthora on the dormant asparagus crowns are distinctive as the roots typically appear water-soaked and gray (Photo 1). There is not another disease that occurs on asparagus crowns that looks similar. The hardest part of inspecting crowns and is that soil from the field makes it hard to see whether the roots are white and healthy or showing that gray discoloration that indicates Phytophthora may be a problem. Any crowns with the grayish discoloration should not be planted as there is no cure for crowns infected by Phytophthora. 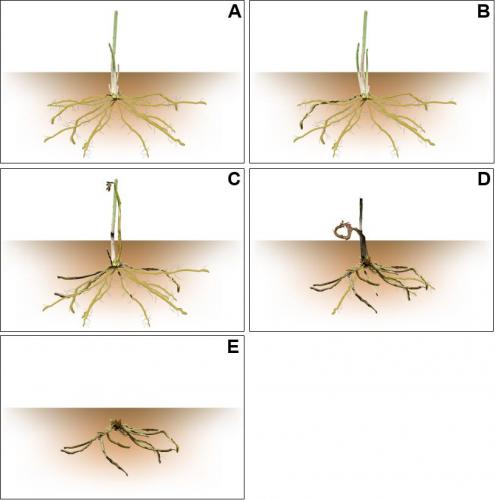 Figure 2. Progression of Phytophthora disease (darkened areas) on an asparagus plant. (A) The crown was originally infected when it was planted and the infection is limited. (B) The infection has expanded and now includes a larger portion of the roots. (C) The infection has expanded so that aboveground symptoms are visible, including a shriveled spear whose growth can no longer be sustained by the infected crown. (D) As the infection continues, the ability to support spear and fern growth becomes more difficult. The buds become infected and cannot produce spear/fern growth. (E) The crown’s infection is advanced leading to a “blind” crown that does not grow.