Phytophthora root and stem rot showing up in soybeans

Growers should scout for symptoms of Phytophthora root and stem rot in soybeans, especially in poorly drained soils.

Phytophthora root and stem rot of soybeans caused by the fungal-like organism Phytophthora sojae is a disease that we typically see in heavy, poorly drained soils. Diseased plants will often be associated with low lying areas of the field that are prone to waterlogging, where symptomatic plants can occur as clusters or individuals. Although Phytophthora sojae can infect the soybean plant at any growth stage, the next few weeks are a key time to scout for symptoms of this disease. Symptoms can vary depending on the soybean variety, including stunting and wilting of infected plants. However, the most characteristic symptoms of the disease include a dark brown or purpling of the stem that will initiate at or below the soil and extend up one side of the stem. This lesion can eventually girdle the stem and kill the plant. 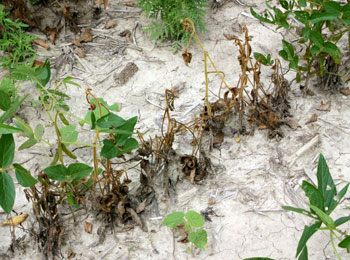 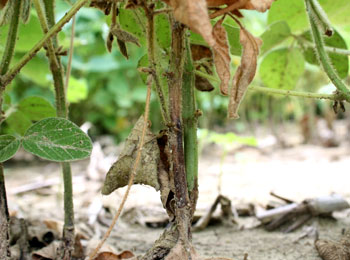 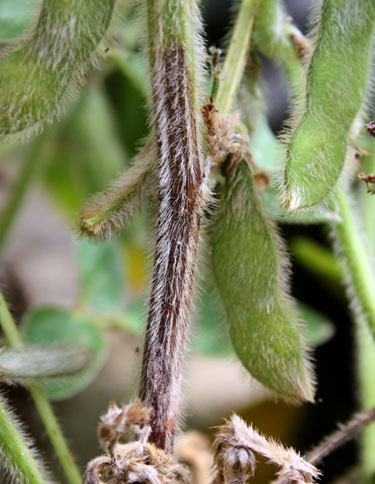 The pathogen is capable of surviving in the soil for a number of years as resistant microscopic spores called oospores. It is these oospores that during periods of moderate soil temperature and free moisture form and release zoospores. Free water for the swimming zoospores is essential for the lifecycle of this pathogen. These zoospores have flagella that they use to swim towards roots that they sense via root exudates. After initial infection of the roots, the infection can spread up the stem.

This season, we will be looking to collect isolates of Phytophthora sojae to examine which pathotypes (races) are present in Michigan; this will help us determine which resistance genes will be effective for disease management. If you have a field with symptoms that we can sample, contact your local MSU Extension educator or me, Martin Chilvers, at chilvers@msu.edu.