P is for Phytophthora rot on ornamentals

Know the ABCs of ornamental greenhouse diseases, including Phytophthora rot.

Phytophthora (Photo 1) is a water mold and can be a particularly devastating and difficult-to-control problem, especially under wet conditions. It can spread quickly in a greenhouse, especially in flood floor and hydroponic systems. Two types of Phytophthora (Phytophthora nicotianae and Phytophthora drechsleri) are usually found in floriculture crops and can cause root, crown and foliar blights.

Phytophthora nicotianae can infect snapdragon (Photo 2), fuchsia, verbena (Photo 3), bacopa, vinca, African violet and dusty miller, to name a few. Phytophthora drechsleri may infect poinsettias (Photo 4). Losses can be especially severe where ample water and warm temperatures favor disease epidemics. Symptoms include brown-black cankers at the soil line and diseased roots. Infected foliage will have a water-soaked, dark necrotic area. In some cases, the crowns will be the first plant part to become infected, after which the infection will move up the stem into the foliage near the petiole. This type of symptom is especially noticeable on English ivy and African violets.

Controlling the spread of Phytophthora spp. can be difficult. First, Phytophthora must be kept out of the production site. This is particularly difficult with floriculture crops because of the widespread distribution of prefinished plants. Also, plants may not exhibit obvious symptoms until the infection is well established or the plant becomes stressed (e.g., over- or underwatering). Infected plants treated with fungicides may appear healthy until the fungicides wear off and Phytophthora increases.

The second challenge is eradicating Phytophthora once it has been introduced. Sanitation can limit disease and includes removing plant debris and disinfesting production surfaces. Power washing benches and replacing floor mats are important steps to take to reduce the pathogen that is available to infect future crops. 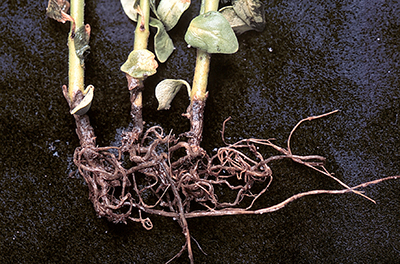 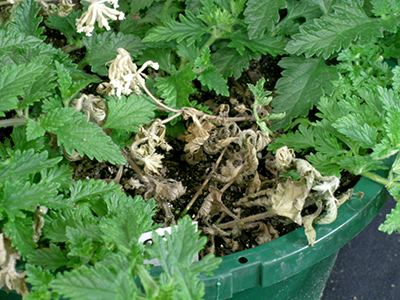 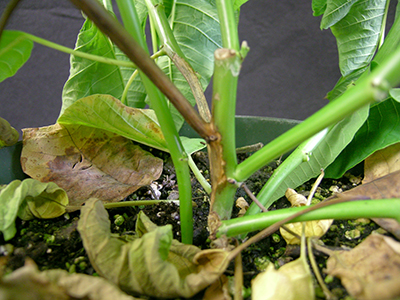 Photo 4. Lesion on stem of poinsettia.

The graph below shows the wide range of susceptibility among osteospermum cultivars to Phytophthora drechsleri. ‘Sunbrella Taurus’ and ‘Sunny Olivia’ showed resistance to infection from Phytophthora while the remaining cultivars in the study had more than 80 percent plant death. 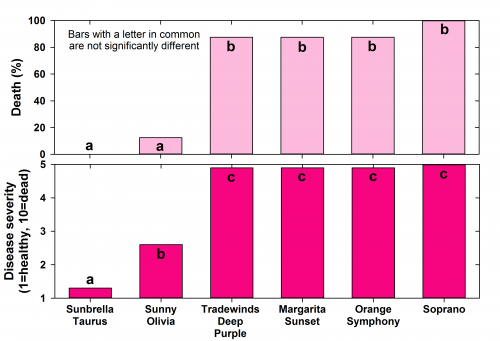 Disease severity and death of cultivars of osteospermum inoculated with Phytophthora drechsleri.

If ornamental fungicides, such as the standard Subdue MAXX, are used to control Phytophthora, rotate it with other effective products. The “A” and “B” Team tables of recommended fungicides for Phytophthora on ornamentals are the result of multiple trials conducted at Michigan State University. The FRAC code is an alphanumeric code assigned by the Fungicide Resistance Action Committee and is based on the mode of action of the active ingredient. When treating ornamentals for Phytophthora rot, rotate among products with different FRAC codes to reduce the possibility of resistance developing in the Phytophthora pathogen. Ornamental products listed in the A Team table consistently provide effective control. B Team products are a good rotational choice when disease pressure is not severe.

Micora SC and Segovis SC have been especially effective in greenhouse studies. Adorn has controlled disease on pansy, poinsettia and snapdragon. Subdue MAXX can be effective, but there have been documented cases where the Phytophthora pathogen has become resistant to this product. B Team products offer help as rotational choices. Some of these products have performed well on one crop but failed on another, so care must be taken to use an effective fungicide program that rotates products to maintain disease control and minimizes the chance of fungicide resistance developing in Phytophthora.