Jerry Lindquist, Extension Educator in Osceola County, sent me a very nice female whitespotted pine sawyer, Monochamus scutellatus (Coleoptera: Cerambycidae). Pine sawyers are among our most spectacular beetles. Like many others who have submitted these beetles to the lab, Jerry’s client was concerned that it was an invasive species. Many mistake it for the dreaded Asian longhorned beetle. This is a native beetle that develops in declining pine trees and is one of the vectors of pinewilt nematode. The genus Monochamus is represented by several wood-boring beetle species in the eastern United States, all of which feed on various conifers. The most common species in our area are M. scutellatus and the northeastern sawyer, M. notatus.

The larvae are known as "sawyers" because of the loud noise they make while feeding. Freshly cut, felled, dying or recently dead trees are preferred. Young larvae feed on the inner bark, cambium and outer sapwood, forming shallow excavations called surface galleries that they fill with coarse, fibrous borings and frass (insect excrement). As they grow older, they bore deep into the heartwood, and then turn around and bore back toward the surface, thereby forming a characteristic U-shaped tunnel. A pupal cell is formed at the outer end of the tunnel, from which the adult emerges by chewing through the remaining wood and bark. Eggs are laid in slits or niches chewed in the bark, preferably near old branch scars or in wrinkled areas on logs. Full-grown larvae are often close to two inches long. Two years are required to complete the life cycle in the Lake states and southern Canada. 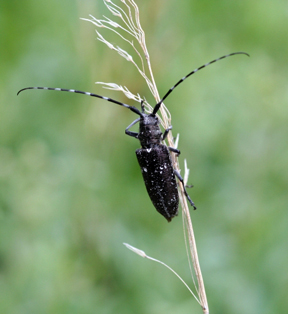 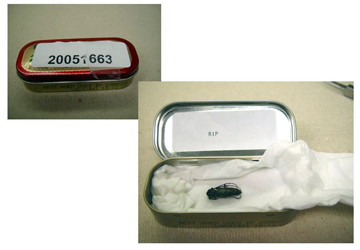 Some time ago, a client sent me a whitespotted pine sawyer in an elaborate beetle casket. I was very impressed. Photo credit: H. Russell, MSU Diagnostic Services.