Harmful and beneficial nematodes are present in Michigan soils.

During the growing season or shortly after harvest in 2015, soil nematode populations were assessed in 32 Michigan vegetable fields with prior crop quality issues. Muck and mineral soils in the major carrot producing regions of Michigan were sampled including the west-central region (Mason, Oceana, Newaygo and Kent counties), the southwest region (Berrien County) and the east region (Lapeer County).

In the southwest region, lesion nematode was most prevalent (67 percent of fields sampled) followed by stunt (56 percent) and root-knot nematodes (33 percent). Stubby-root and lance nematodes were each detected in one field. 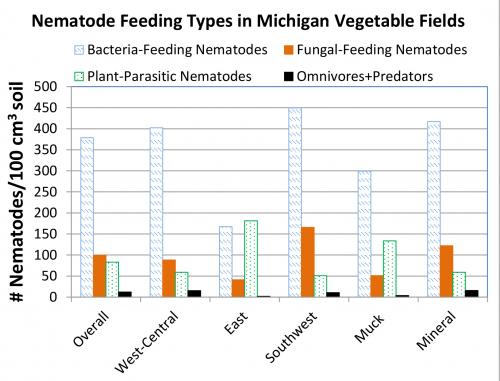 Bacteria-feeding nematodes help cycling nutrients into plant-available forms and increase rapidly in the presence of abundant, simple resources such as sugars. Fungal-feeding nematodes increase relatively rapidly with abundant resources, and are involved in breakdown of recalcitrant materials such as fibrous plant material. Omnivores and predators can feed on other nematodes and can help limit plant-parasitic nematode densities. Omnivores and predators do better in a more stable (fewer changes) soil environment.

The high proportion of bacteria-feeding nematodes relative to other types of nematodes suggests Michigan vegetable soil ecosystems are nutrient-rich, but disrupted often and relatively basic. This status is typical of agricultural systems with annual crops.

Acknowledgement: This project was funded in part by the Michigan Carrot Commission, Michigan Vegetable Council, Project GREEEN and the MSU AgBioResearch Hatch project.

Introduction to the Great Lakes Biochar Network and Biochar Basics