Planting delays are not unique to Mid-Michigan

States across the Corn Belt have experienced above normal precipitation over the last three months leading to delayed planting.

Mid-Michigan farmers have struggled to find fields in the optimal condition to plant this year, but they are not alone. A recent article on SustainableCORN.org titled “Precipitation maps show reason for planting delays” indicates that much of Iowa, Illinois and Missouri have more than one and one half times normal precipitation over the last 90 days. There are locations within those states that have received over two times the 30-year average for precipitation. 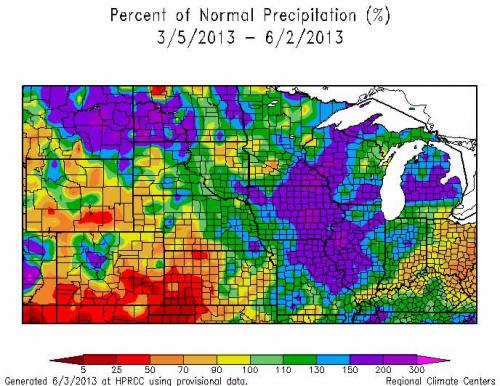 In Michigan, the central part of the state has received the greatest amount of rain this spring. At the Ithaca Enviro-weather station, 13.77 inches of rain fell March 1 through June 3, 2013. This is 5.48 inches more than the five-year average and 2.44 inches above the most recent wet spring of 2011. Since April 1, just over 60 percent of the days have had rain and four days in the last two months would be considered extreme events with over 1.25 inches of rainfall. 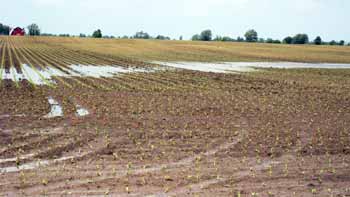 Wet conditions in the spring can be especially difficult, causing planting delays or compromising planting conditions when getting the crop in. According to the UDSA NASS report through June 2, Michigan has 93 percent of soybeans planted and 99 percent of the corn planted, while Illinois (49 percent), Iowa (44 percent) and Missouri (36 percent) are all reporting less than 50 percent of their soybeans planted. These states all show a large land area that has received 1.5 to two times the normal rainfall. When talking with farmers in the heavy rain areas of Michigan, we are finding they have planting progress similar to most delayed states. Michigan State University Extension educators submit weekly reports tracking crop progress throughout the state. Visit MSU Extension News for Field Crops for the most recent progress in your area.

Planting delays were common this year across the mid-west and Michigan was no exception. With persistence and a few good drying days, farmers will make great progress in finishing planting.