Planting disease-free potato seed is important for all potato growers

Selecting and planting clean, disease-free potato seed pieces is an important first step to assuring a successful potato crop, no matter the size of your acreage.

Starting the season with disease-free potato seed stock is the first step in establishing a good stand that will maximize yield potential. There are several diseases growers should be concerned with when selecting seed potatoes that will produce vigorous uniform stands, especially potato leafroll virus, potato virus Y, also known as “common mosaic,” and late blight (Phytophthora infestans).

Potato leafroll virus can cause foliar symptoms of disease, one of which, as the name implies, causes the leaves of the potato plant to roll. It can also cause the leaves to become pale and chlorotic. Symptoms of infected tubers can include internal net necrosis, as well as reduced tuber size and overall yield. Some varieties are more susceptible than others and some varieties may be infected without expressing symptoms.

The primary means of spreading potato leafroll virus from plant to plant during the season is by aphid feeding. Overwintering and infection from one season to the next is commonly achieved in live plant tissue such as infected potato tubers. Potato leafroll is managed by a combination of planting seed tubers free of leafroll virus, eliminating volunteer potatoes and weeds, eliminating refuse tubers and managing aphids.

Potato plants infected with potato virus Y may show a wide range in severity of symptoms depending upon the potato variety. The range may include infection with no symptoms, mild foliar mosaic symptoms or severe symptoms such as wilting of the entire plant and death. Certain strains of potato virus Y, such as PVYN (the “n” stands for necrotic), can cause necrotic symptoms in tubers. Red Norland and Russet Burbank are two examples of particularly sensitive varieties. Some varieties, such as Russet Norkotah, may carry potato leafroll virus without expressing symptoms and are still capable of transmitting the disease.

As with potato leafroll virus, aphids are the primary means in which the disease is spread from plant to plant. Infected potato tubers (seed potatoes and volunteers) are the primary source for new infections in the following season. Planting resistant varieties like the Premier Russet can help reduce the incidence of infection and rate of transfer while growing and yielding normally despite infection.

Late blight is perhaps the most famous of the potato diseases. Many U.S. citizens of Irish descent can trace their roots back to ancestors who emigrated from Ireland in the 19th century to avoid famine due to consecutive failed potato crops due to late blight. Late blight is a fungal disease that overwinters on live plant tissue and can cause severe destruction to the foliage of potatoes and tomatoes. It is spread by fungal spores that can move on air currents or mechanically.

Like the viral diseases mentioned above, infected seed potatoes and volunteers are often a means of overwintering from season to season. To get details on the late blight risk level in your area, visit Michigan State University’s Late Blight Risk Forecasting website. 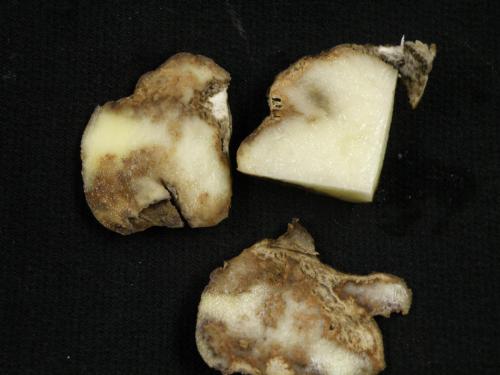 The importance of planting disease-free seeds

All three of these diseases are commonly carried from one growing season to the next in potato tubers. Michigan State University Extension recommends planting disease-free seed potatoes as an important step in breaking the disease cycle and preventing the disease from becoming established. While it may be tempting to save a few potatoes from your favorite varieties to plant each year, or purchase seed from an uncertified source, purchasing professionally grown, clean seed will pay long-term dividends. For all growers, both large and small, one infected seed lot has the ability to spread disease from plant-to-plant as well as field-to-field and farm-to-farm.

Michigan, as well as many other states, has an active seed certification program where producers can have their seed inspected by a third party to assure buyers their product is of high quality. In Michigan, the inspection of seed begins while the seed is being grown. Field inspection includes observing the stem and leaves for disease symptoms and assuring the seed crop is adequately isolated from disease sources. After harvest, the seed lot is inspected, sampled and laboratory tested for further evidence of disease.

For a list of seed potato growers including available varieties for purchase, visit the Catalog of Michigan Seed Potatoes.

It is also noteworthy that the above-mentioned diseases can infect other Solanaceae plants such as tomatoes.